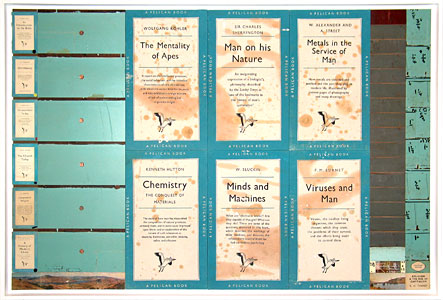 Co-winner of the 2005 prize, James Powditch, suspected his painting God is in the Detail (Intelligent Design) was not exactly the devotional work the judges had in mind. It’s a rage against the forces of anti science and a lament for a world where the age of science has given way to an age of spin. “I think faith is a fantastic thing but I guess it’s that crossover into politicians using it purely for political ends that worries me.”

“I am pretty sure [they] didn’t want me doing this.” The work, which contrasts science books with philosophy books (and a cheeky picture of a bearded, bespectacled Queen Elizabeth) is a dig at proponents of ‘intelligent design’—the theory that suggests nature is so complex it can only be explained as the handiwork of a higher being. 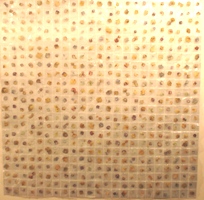 The other 2005 co-winner was Louise Rippert, for her delicate leaf and paper collage Dance. The artist said Dance arose from her concern about the plight of humanity and the manipulation of religious fears by politicians for their own ends.