To me, this is scary stuff. The scale is huge.

Scientists from the British Antarctic Survey recently announced that there has been an enormous fracture on the edge of the Wilkins Ice Shelf, which started breaking up last month. The shelf is a body of permanent floating ice on the western edge of the Antarctic Peninsula, the part of Antarctica most vulnerable to climate change. 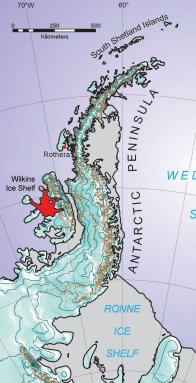 A 41 by 2.5 km berg has already broken away and is moving. Scientists have observed huge, geometrically fractured slabs of ice and, among them, the rubble of a catastrophic breach. It will not cause a sea-level change, as the ice is already afloat. However, Wilkins is the largest ice shelf on the Antarctic Peninsula yet to be threatened and this cracking is another identifiable impact of climate change on the Antarctic environment.

The BAS says that the breakout is the latest of many in a region of Antarctica that has experienced unprecedented warming over the last 50 years. Several ice shelves have retreated, six of them collapsing completely (Prince Gustav Channel, Larsen Inlet, Larsen A, Larsen B, Wordie, Muller and the Jones Ice Shelf.)

As the IHT comments in an editorial,

What matters isn’t just the scale of this breakout. Changes in wind patterns and water temperatures related to global warming have begun to erode the ice sheets of western Antarctica at a faster rate than previously detected, and the total collapse of the Wilkins ice shelf is now within the realm of possibility.

It also comes as a reminder that the warming of Earth’s surface is occurring much faster at the poles than it is in more temperate regions.

Nothing dramatizes the dilemma of global warming quite like a fracture of this scale. There is nothing to be done about a collapsing polar ice sheet except to witness it. It may too late to stop the warming decay at the boundaries of Antarctic ice, yet there is everything to be done. Humans can radically change the way they live and do business, knowing that it is the one chance to find a possible limit to radical change in the natural world around us.