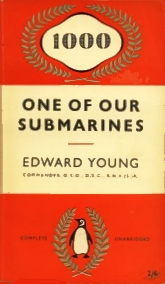 Every now and then I unearth from my books an almost forgotten treasure, for instance One of our submarines by Edward Young, which was the 1000th Penguin.
Commander Edward Young DSO, DSC, RNV(S)R was born in 1913. As a young man he joined a publisher and became interested in printing and design. When Penguin Books started in 1935 he was production manager, designed the cover, and drew the Penguin emblem.
In April 1940 he joined the Royal Navy Volunteer Reserve and four months later volunteered for submarines. After three years of active patrols off Norway and Russia, in the North Sea, the Bay of Biscay and the Mediterranean he was appointed commander of submarine P.155. From 1943 he became CO of HM Submarine Storm, which served in the Far East attacking Japanese shipping in the Malacca Straits.
After the war, Young was director in charge of production and design in a new publishing company and was also part-time typographical adviser to the printers who produced the edition of his book that became Penguin No. 1000. He tells his story in a modest, clear, and amusing way that is a delight to read.