Some time ago I looked at Gianni Versace’s book Men Without Ties which includes contributions and photos by other writers and photographers interpreting Versace’s vision of male beauty and men’s fashion and shows some of his best-known clients wearing his clothes.

I’ve worn a tie just twice in the past ten years. I loathe them. 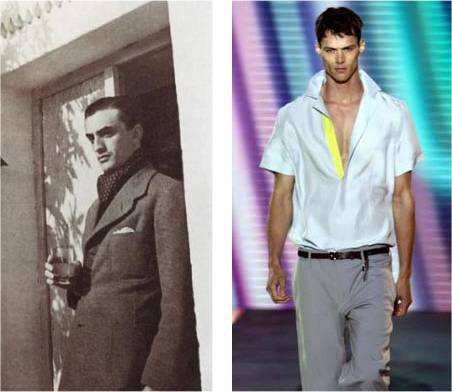 When the American edition of Men without ties was published in 1995, Versace was interviewed by Ingrid Sischy (Interview June, 1995)

Ingrid Sischy: … In sculpture, when there was a big revolution happening, the pedestal became the symbol of all the past assumptions that had to be rethought. Is the tie, in the context of men’s fashion, your equivalent of the pedestal that needs to be smashed?

Gianni Versace: Yes. Actually, I have nothing against individual ties, but I hate what ties mean as a symbol. I hate the restrictions they have come to embody. I hate the fact that they represent a uniform way of understanding men’s style, and I hate the rules they stand for. It is so stupid that you can’t go in certain restaurants if you’re a man and you don’t have a tie on. That’s insane to me. You see some really horribly dressed people with ties on in such a restaurant, and yet someone who had a beautiful flowered shirt on couldn’t get in. Fashion has to be free to express personality and individuality. I don’t understand why a man can’t go to work wearing a beautiful turtleneck or a beautiful T-shirt. Thank God, all that has started to change, and in many places a man can, and does.

I … Have you always been bothered by the restrictions that are imposed on men in terms of how they are dressed?

GV: When I was young, I wondered, why do men have to dress all the same? Why do they have this boring uniformity? I always liked people who were out of the crowd, who were individuals, who were free, who had a real sense of style, which means their own sense of style. I believe in style. I believe in people who have something to express, who make statements. That’s why in the book there are photos of Picasso and Hemingway and Nijinsky and Cocteau and Robert Mitchum and Nureyev, and for men of today, Elvis, Prince, and Elton. . . . These are people who make statements about their lives via their individual styles of dressing. You can tell the lifestyle of their art, of their living, of their loving.

I … The best designers are hip to the changes that have gone on with both sexes and have helped them happen. But the fact is that a lot of fashion is still stuck on old Ideas of men and women, and on old ideas of appropriateness.

GV: Fashion can help, but it’s the person first who brings about changes. For example, the men’s fashion I create has to do with personal desires. It is an expression and branch of myself. But I don’t put myself on the stage. I put my “character” up there-the man who is free and who likes to dress in an individual way.