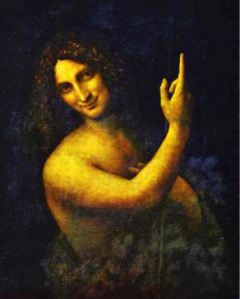 The hoo-hah about The Da Vinci Code prompted me to learn something about Leonardo. This is his St. John the Baptist c.1513-1516, from the Louvre. To our eyes, it’s a little err … odd. It’s queer.

Art teacher Shelley Esaak writes that it’s typical of Florentine pictures of young men at the time. “Leonardo was not alone in this perceived artistic gender-bending. He was his own man, but he was also a product of his time. … The Florentine School had a long tradition of often depicting young males as sweet, pretty, rather effeminate persons. Why? Well, it was simply how it was done. It was tradition, and at least partly so because young men were frequently objects of desire—outright lust, if you will—of some, usually older, Florentine men. Yes, pedophilia, as we now describe it. … Leonardo was sticking to tradition: Biblical … Florentine (young men were often love objects) and the Florentine School (young men were often painted as “pretty”).”

Which brings me to the question I ask myself: “How much of our representation of Biblical figures, especially Jesus, is merely an artifact of our own time and culture?”