I’ve made a few entries in this journal about the war service of my forebears. This does not mean that I admire war, but to understand one’s parent and grandparents, nonetheless, one does need to know what they went through. Yet war has its own curious fascination; its complexity, its drama, its risks and challenges, victories and defeats. 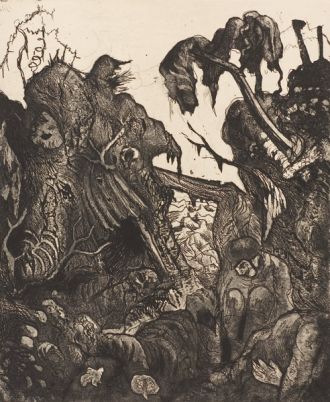 Otto Dix was one who understood this ambivalence. He was both horrified and fascinated by his experiences of the 1914-18 war. The National Gallery of Australia has a copy of Otto Dix’s war portfolio Der Krieg of 1924, a collection of 51 etchings with aquatint – a truly great twentieth century masterpiece, which the gallery acquired in 2003. This is Zerfallender Kampfgraben [Collapsed trenches] (30cm x 24.4cm plate on a 47.5cm x 35.3cm sheet).

“Consciously modelled on Goya’s equally famous and equally devastating Los Desastres de la Guerra. [The disasters of war], the portfolio captures Dix’s horror of, and fascination with, the experience of war. It mixes the nightmarish and the horrific with a strange sensuousness in a work that has been described as one of the most powerful anti-war statements in modern art.”

Dix’s terrible images reminded me of this photograph, which won first place for Stephen Dupont in the Magazine spot news category of the 2006 Pictures of the Year International. Titled War on the mind, it shows members of the U.S. 1st Battalion, 508th Infantry Regiment of the 173rd Airborne Brigade burning the bodies of dead Taliban fighters following an ambush on their convoy outside Gonbaz village in Kandahar Province, Afghanistan on 1 October 2005. While the bodies burned, anti Taliban/Islam messages were broadcast. 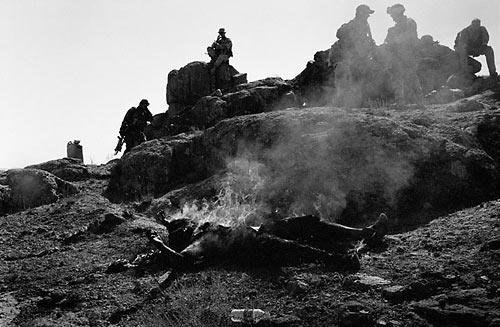