Before the Devil Knows You’re Dead (2007) directed superbly by Sidney Lumet from a solid, well crafted script by Kelly Masterson, brings to mind the classical tragedy, where a single disastrous action brings about a long saga of terrible consequences, often within a family. But as NYT reviewer A.O. Scott says,

the evil in this world arises not out of any grand metaphysical principle, but rather from petty, permanent features of the human character: greed, envy, stupidity, vanity. There are no demons on display, just small, sad, ordinary people. The filmmakers rigorously tally the results of their sins, minor lapses made monstrous by the failure of love and the corruption of ambition. Simple, familiar desires-for money, sex, status, respect-end in murder. 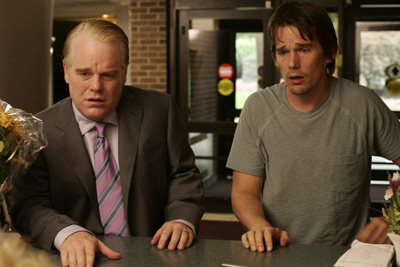 Almost every character is corrupt in some way, or many ways, but Andy Hanson (Philip Seymour Hoffman) is the most horribly corrupt as he plans the robbery at the centre of the plot, enlists his younger brother, Hank (Ethan Hawke) to do the robbery and then kills to cover his tracks when it all goes very wrong. Yet I liked the film-even enjoyed it—for, as Scott also says,

As pessimistic as it is—you have to squint hard to find the barest flicker of redemption in its denouement-“Before the Devil Knows You’re Dead” is also curiously exhilarating. Some of this comes from the simple thrill of witnessing something, or rather everything, done well. Even the overwrought performances-Mr. Finney’s growls, Mr. Hawke’s twitches-have integrity and conviction. This is a melodrama, after all, and its lifeblood is in the manic acting …