The Big Combo is an Allied Artists 1955 American film noir directed by Joseph H. Lewis and finely photographed by cinematographer John Alton, with music by David Raksin. It was played on ABC2 recently and I found it interesting entertainment. 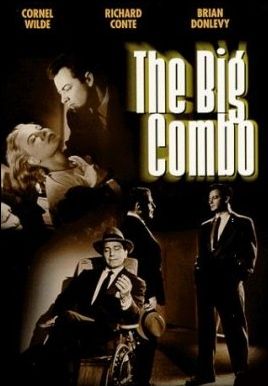 This violent dark story tells of tormented police Lieutenant Leonard Diamond (Cornel Wilde) who is on a personal crusade to bring down sadistic gangster Mr. Brown (Richard Conte). He’s also dangerously obsessed with Brown’s girlfriend (Jean Wallace). When Brown finds out that Diamond is on the case, he taunts Diamond who becomes yet more obsessed. The film ends dramatically in a classic foggy airplane hangar shootout.

Apparently its regarded as a classic, stylistically at least, with Alton’s cinematography particularly notable. The plot is bit thin, but the direction, music and photography are very fine, and the acting credible in the genre.

Of course these days at the cinema, a ‘big combo’ is more likely to be a giant serve of popcorn and a large Coke.