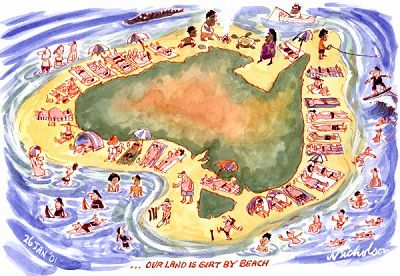 Many have long believed that 26 January, the anniversary of the first white settlement in 1788, is the wrong day for our national day, but we are at a loss for anything more satisfactory. (Cartoon by permission: Nicholson of The Australian newspaper: www.nicholsoncartoons.com.au)

“Front up” is a Canberra Times column for commentary by those born after 31 December, I976. I’m inclined to agree with Rhys Bower who wrote that “Australian identity” doesn’t exist.

What he means, I think, is a that a common identity doesn’t exist. Rather, I would say that each we find our Australian identity in differing ways. My Australian-ness is in my love for for the landscape, it’s openess, its shapes and colors. That’s about place not nationality. As to people, with Bower, I’m cosmopolitan and international.

Shared. What characteristics do we all share? It is a tough task to find some attribute that we all share. A big job too. We would need to look all over Australia to make sure we don’t miss anybody. From Canberra to Cairns, Darwin to Darlinghurst, St Kilda to St Marys, Lakemba to Lamington. Probably too big a job, so we give it a good guess and find fairly common or widely shared attributes and this gives us a good approximation of what is Australian.

Unique. What are some of the ideas that the word Australian evokes? Mateship? Sure, I have mates and I’m sure you do too. I have mates that aren’t Australian though, some don’t even live here and one is a dog.

The Anzac spirit? Like Australia is the only country to send troops to war. I love Anzac Day, but the Anzacs probably have more in common with soldiers of the Red Army than with me or the Australians I see.

Barbies, beaches, beers, bush, cricket, farms, footy, Fords, families, fishing, outback, outdoors? All these things are found elsewhere. Is there anything about us that is unique? Probably only the shape of the island we live on.

So does the Australian identity exist as anything but a nostalgic fiction? Probably not. If it does, it excludes some Australians and really doesn’t set us aside from other people around the world. So does it serve a useful purpose? I don’t think so, and let’s not forget that if it does I exist, it is predicated on denial of sovereignty and oppression of the culture of the original occupants of Australia, but we tend to ignore that.

Australian is just a word on my passport, oh, and the last line of my address.

Also worth reading: Tom Keneally: A date worthy of celebration in The Australian (26 Jan.).