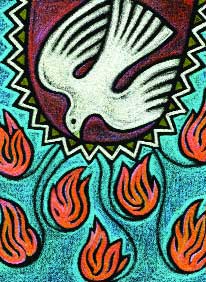 This image of the dove and tongues of fire is from the 3 June 2006 edition of the The Tablet, which has an article on Pentecost by James Alison. He shows how “Luke’s tableau of Pentecost, sketched out for us in Acts 2, is an extraordinarily deft compilation of scriptural fulfilments.”

[O]f course, the gathering together of all the nations and languages in Jerusalem reflects the beginning of the undoing of Babel, where tongues became confused as a punishment for the pride of those who would have made one language which would have controlled the whole earth. Here God undoes the confusion without imposing a single language, but enables the single truth to be spread throughout all the nations of the earth, thus permitting for the first time a non-controlling unity of all humans. It is the same truth in all translations, none “purer” than the other, for we are all secondary cultures. Back even beyond this, the Spirit which comes down is the same Spirit as that which hovered over the earth. It is the Creator who is erupting into his people.

Those gathered in Jersusalem for the feast were from many lands, yet they were together as worshippers of the one true God—a diversity echoed in this rainbow image from the Jerusalem Open House. 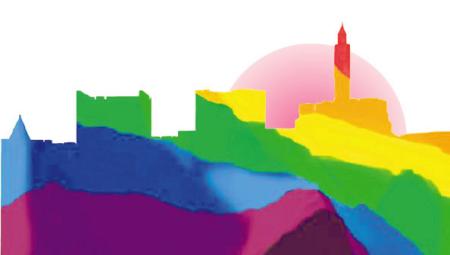 The Jerusalem Open House LGBTQ Community Center (JOH) is a grassroots, activist organization of lesbians, gay men, bisexuals and transgendered people. Since 1997, it has worked to make Jersusalem a place where all are free to seek self-fulfillment. Its greatest challenge is a tradition of conformist heterosexism that continues to be enforced by almost all Israeli social institutions, especially in Jerusalem, a city of traditional values and deeply rooted religious commitments. The JOH provides services to build the community and act as a catalyst of LGBTQ fellowship and culture. It also advocates social change on issues of concern to its constituents, taking action to promote the values of tolerance and pluralism in Jerusalem. 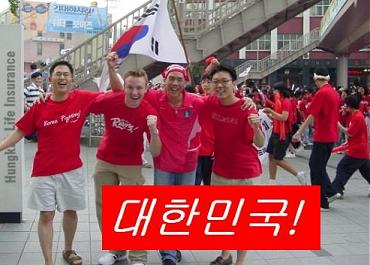 To celebrate Pentecost, we all wore red to church. I had to hunt to find a red shirt—they’re not in fashion and I don’t usually wear red. All the red colors reminded me of my visit to Korea at the time of the 2002 World Cup, when the street were full of people wearing red tee shirts and chanting “Dae Han Min Guk” in support of the Korean national team, the fans of which are called the “Red Devils”. It might have been fun to wear a “Devils” shirt to church! I couldn’t even find a World Cup shirt in Korean colours—not many Korean fans in Canberra, it seems. James and I supported Australia, of course. Nike’s retro designs for the official team outfits are rather dull. The Australian players didn’t seem too thrilled with theirs. So long as they would play as least as well as the team beloved of the “Red Devils”! 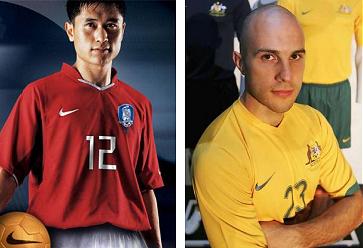