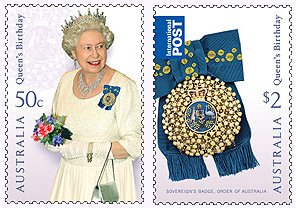 In most of Australia, a Monday in June is observed as a public holiday in honour of the Queen’s official birthday. John Warhurst, Professor of Political Science at the Australian National University and Deputy Chair of the Australian Republican Movement argues that, “The Queen’s Birthday public holiday perpetuates the confusion the British monarchy brings to Australia’s national identity. It is one of two days on which Australian Honours are announced. In an evolutionary step, these honours replaced the award of imperial honours to Australians. Yet not only are they still officially awarded by the Queen, Australians awarded such honours cannot escape their identification with the British monarchy.”

Perhaps, but it is also the Australian monarchy, and our sovereign’s style and title are Elizabeth the Second, by the Grace of God Queen of Australia and Her other Realms and Territories, Head of the Commonwealth.

I’m of two minds about a republic. Sentimentally, I favour the monarchy, for its rich pageantry and historical associations.

Replacement of the constitutional monarchy by a republic with an Australian head of state is supported by members of all parties and is the official policy of the Labor Party, which is wisely committed to an initial plebiscite as the best step towards another republic referendum.

The practical difficulties of a change are considerable. There must first be agreement on the form of republic to be adopted. The a referendum must a achieve majority support of the electorate as a whole andthe support of a majority of the voters in a majority of the states (i.e., 4 of the 6 states). Long experience shows this to be very difficult to achieve. As Warhurst observes, the ‘If it ain’t broke, don’t fix it’ argument was used effectively against republicans at the 1999 republican referendum, which comprehensively rejected changed. The nature of the ‘No’ campaign, he says, was to urge republicans to wait for a better model. “Authoritative research has shown that many republicans did exactly that. Indeed a majority of ‘No’ voters claimed to be republicans. The lesson was not that Australians were not republicans but that republicans were outwitted.”

There’s no great groundswell of support for change.