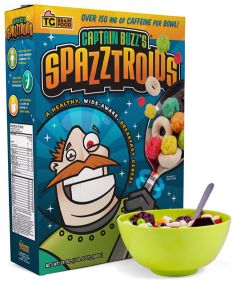 Amid the usual lame April Fool stuff, these made me smile. “Spazztroids! The hyper-caffeinated cereal from beyond!” Sounds like just what I need.

Throughout the Universe, one man has waged war against both hunger and sleepiness. One man has taken a stand for a healthy, wide-awake, breakfast cereal. Cap’n Buzz! And there is only one cereal worthy of being eaten by the Cap’n: Spazztroids! Why? Because Spazztroids is the only cereal loaded with vitamins, a hyper-sweetener, and loads and loads of caffeine! That’s right – CAFFEINE! One bowl of Spazztroids is one healthy bowl of cereal and one-and-a-half strong cups of coffee all rolled into one! Each serving of Cap’n Buzz’s Spazztroids will pump your body with vitamins and nutrients (in yummy, crunchy, space shapes) but you’ll also get a 180mg dose of caffeine.

Then there’s the North Korean people’s phone. My suspicions began about when the article started to say that the phone had only four buttons, can never be turned off, and had a 36-volume user manual including a 400-page introduction by Kim Jong Il himself. I don’t think the North Koreans could afford that much paper-something like 200 trillion pages. (And that doesn’t look like a Korean in the picture.)