The importance of having a national day is obvious, but is January 26 the right one? For many, Australia Day is welcomed as the final holiday before the nation puts away its summer wardrobe and prepares for the year ahead. It is often a low-key occasion characterised by picnics at the beach and quiet suburban ceremonies, a far cry from the ostentatious displays of patriotism that mark national days in other countries. Given the nation’s history, this is perhaps unsurprising. Australia did not rise from the ashes of revolution or civil war. Aside from Anzac Day [25 April], which carries a solemn significance unsuited to a day of celebration, there is no momentous event that serves to galvanise national pride. Even the date used since 1931 as a focus for festivities is contentious. January 26 commemorates the day Governor Arthur Phillip sailed into Sydney Cove in 1788 with a fleet of convict ships and colonised the fifth continent in the name of a British monarch.
Of greater import is the fact that the founding of our first city entailed the subjugation of the indigenous population by a European civilisation. For Aboriginal Australians, January 26 is not, and will never be, a day of celebration.
[…] Until now, the Government has resisted all such suggestions. But it is significant that in 2005 then Governor-General Michael Jeffery opened the year’s celebrations at a dawn service at Uluru. He emphasised the need for Australians to embrace indigenous history and customs and called on schools to teach Aboriginal culture as a means of linking black and white Australia. […] 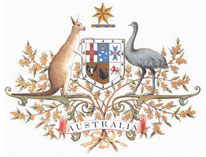 The difficulty is to find an alternative date. There is no single day on which Australia became independent. Rather, our separation from Britain has occured in stages, and we still share the same monarch. The centre of our most formal national symbol, the coat of arms, portrays our political orgin in 1901 as a somewhat reluctant union of six fractious British colonies, who still rival each other as states of Australia’s ‘Commonwealth’.
Advance Australia Fair, the national anthem, adopted in the 1980s to replace God Save the Queen, was written in the nineteenth century and its words had to be changed to remove sexism and jingoism. But most national songs are a bit silly and this one is no worse than most; though, at 50-something, I do find it hard to sing with a straight face “for we are young and free”. But every time the song is heard at an Olympics medal ceremony or wherever, it has a little more cred.

Beneath our radiant Southern Cross
We’ll toil with hearts and hands;
To make this Commonwealth of ours
Renowned of all the lands;
For those who’ve come across the seas
We’ve boundless plains to share;
With courage let us all combine
To Advance Australia Fair.
In joyful strains then let us sing,
Advance Australia Fair.