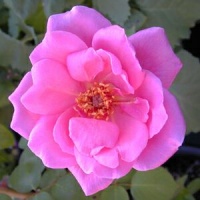 Roses do well in Canberra. Australia’s Old Parliament House has had rose gardens since Robert Broinowski began work on them in 1931, using donations from ordinary Australians. The National Capital Authority (James’s employer) has restored the Old Parliament House gardens with more than five thousand roses, once again sponsored by private donors. James and I sponsored one in honour of my late mother, June, and were assigned a Lady Mann. It’s a hybrid tea rose bred in Australia in 1937, with dark foliage and strongly colored pink blooms. It is a recurrent flowerer with a strong fragrance, growing to about 1.8m.

The Lady Mann rose was to be planted in the Rex Hazlewood Rose Garden, located on the Senate side of the building. The garden was designed in 1931 by Sydney rose specialist Rex Hazlewood at the request of the then National Rose Society of New South Wales. The garden is to tell the history of the rose, displaying many old roses. The centre of the garden features roses bred by internationally renowned Australian rose breeder Alister Clark. One of these is the Lady Mann.