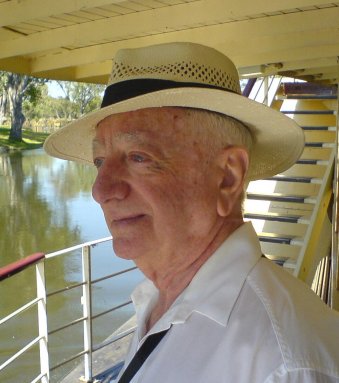 January 2nd 2006 was the 83rd birthday of my Dad, John McKinlay. We shared a leisurely restaurant dinner and a bottle of wine and talked ’til late. We enjoyed ourselves greatly.

The next morning, my sister and her daughter took us with them on a one hour river cruise on the P.S. Cumberoona. Built as part of the 1988 bi-centenary of Australia celebrations, this paddle steamer is a locally-built relica of an 1866 boat of the same name. It uses two original 1906 Buffalo Pitts 18-horsepower steam engines, powered by a replica wood-fired 130 p.s.i boiler. 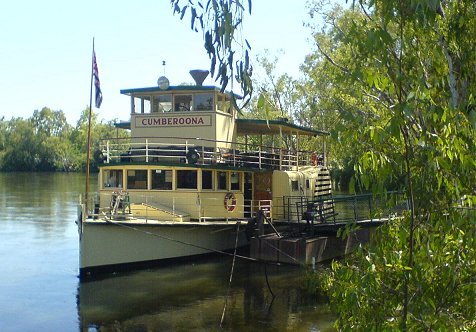 About a dozen paddlesteamers still operate on the Murray River. Some are replicas; others, like the Marion are a century old and have been restored. Murray River transport was important from about 1860 to about 1920. The river is long, but could not take boats large enough to compete with the railways; in times of drought, water levels are too low for navigation. There are still large tourist boats that offer luxury cruises of several days on the lower reaches of the Murray. But in middle reaches of the river, use of water for irrigation lowers the river levels for much of the year. 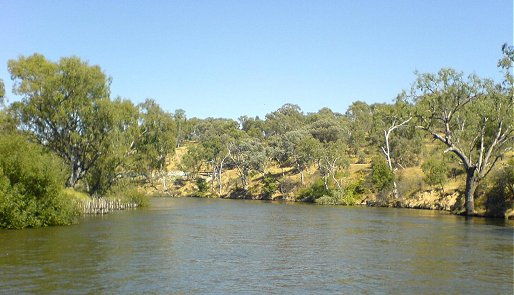 The P.S. Cumberoona had been pretty much out of action for months, because of the drought and consequent low water level in the river. But now, after recent rains, the reservior is filling and authorities have begun to release water into the Murray from the reservior, to flush the river and for irrigation. So the river was in full flood. 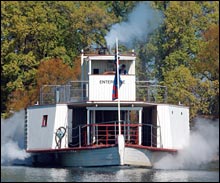 From September 1988, the P.S. Enterprise, a small Murray River paddle steamer has been operating on Lake Burley Griffin in Canberra as a working exhibit of the National Museum of Australia. Constructed in 1878, Enterprise has been restored to working condition as it was in 1910 when it was in use as a barge towing vessel. It is now the second-oldest paddle steamer in Australia and, as one of the oldest steam vessels still afloat anywhere, is a vessel of world significance.