It was a special experience to see and hear, live, the New York Philharmonic’s concert in Pyongyang, last night. The program was carefully chosen … the two national anthems, the Prelude to Act III of Wagner’s “Lohengrin,”, Dvorak’s “New World” Symphony, Gershwin’s “An American in Paris.” Bernstein’s “Candide” overture, and “Arirang”. As the New York Times (27 Feb 08) describes:

As the New York Philharmonic played the opening notes of “Arirang,” a beloved Korean folk song, a murmur rippled through the audience. Many of the staid spectators at this historic concert on Tuesday night perched forward in their seats. The piccolo sang a long, plaintive melody, cymbals crashed, harp runs flew up, the violins soared. And tears formed in the eyes of the sober audience, row upon row of men in dark suits and women in colorful traditional dresses, all of them wearing pins of Kim Il-sung, the nation’s founding leader. And there, the Philharmonic had them. The stirring performance of a piece of music deeply resonant for both North and South Koreans ended the concert in triumph. 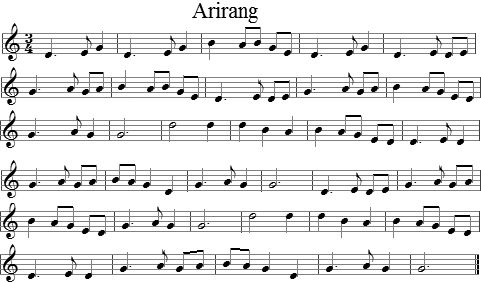 “This is difficult to describe,” said one journalist’s government-assigned minder, who was sitting in the audience. “My heart is booming. It’s too exciting.” The audience applauded for more than five minutes, and orchestra members, some of them crying, waved. People in the seats cheered and waved back, reluctant to let the visiting Americans leave.

“Was that an emotional experience!” said Jon Deak, a bass player, moments after the concert ended. “It’s an incredible joy and sadness and connection like I’ve never seen. They really opened their hearts to us.” The “Arirang” rendition also proved moving for the orchestra’s eight members of Korean origin. “It brought tears to my eyes,” said Michelle Kim, a violinist whose parents moved from North Korea to Seoul during the Korean War and who later moved to the United States.

… The concert brought a “whole new dimension from what we expected,” Lorin Maazel, the Philharmonic’s music director, told reporters afterward. “We just went out and did our thing, and we began to feel this warmth coming back.”

North Korea, with its highly centralized system and tight controls on the daily lives of its people, remains firmly in the grip of its leader, Kim Jong-il. He and his father, Kim Il-sung, are the subjects of a personality cult that requires portraits in every home and their images on lapel pins on the jackets of officials. Huge statues of the older Kim dominate cities. The state operates what human rights experts say is a vast gulag of labor camps, many filled with the ideologically suspect and their families. Only a trickle of foreigners come regularly to North Korea, and even fewer journalists. The influx with the Philharmonic is serving as something of a shock. A resident Western diplomat reported the words of one foreign ministry official: “Yes, this is something big.”

Jeff Jacoby in the IHT (3 March 08) was scathing of the failure of the orchestra’s leader to admonish the regime even a little.

Pyongyang overture
The big news in the music world last week was the New York Philharmonic’s visit to North Korea, the first time an American orchestra has appeared in Kim Jong Il’s Stalinist dictatorship. Under music director Lorin Maazel, the philharmonic performed Wagner’s prelude to Act III of Lohengrin, Dvorak’s New World Symphony, Gershwin’s American in Paris, and, as a closer, the Korean folk song Arirang. While Kim did not attend the performance, nearly everyone in the hand-picked audience of apparatchiks was wearing lapel pins depicting his face or that of his father, Kim Il Sung, who founded the tyrannical regime in 1948.
Maazel characterized the concert as a triumph, and speculated that it would "do a great deal for Korean-US relations." But the only clear beneficiary of last week’s trip was Kim, whose propagandists will portray a performance by one of the world’s preeminent musical ensembles as a gesture of tribute to the Dear Leader. In totalitarian North Korea, as Melanie Kirkpatrick noted in the Wall Street Journal, "the purpose of music, like that of all the arts, is to serve the state."
A few years ago, Maazel composed an opera based on George Orwell’s Nineteen Eighty-Four. It was an experience, he says, that sensitized him to the horrors of tyranny-"brutal torture, systematic injustice, contempt for any human dignity." Where was the evidence of that sensitivity during last week’s trip to North Korea? Defending the decision to visit one of the planet’s most horrendous slave states, Maazel had insisted that "human rights are an issue of profound relevance to us all." But not profound enough, apparently, for Maazel to actually defend them in the presence of North Korea’s jailers. Indeed, while the maestro hasn’t hesitated to condemn the United States, he brushes off as mere "errors" the savageries of Kim’s regime.
"Is our reputation all that clean when it comes to prisoners and the way they are treated?" he demanded in an interview, when asked whether the philharmonic should be making music for a police state. "I think we can . . . stop being judgmental about the errors made by others." Which just goes to show that one can be blessed with perfect pitch yet be devoid of moral judgment. At least in that regard, Maazel’s decision to program Wagner was only too apt.
Music in North Korea? Maazel ought to meet Ji Hae Nam, a one-time government propaganda officer who spent three years in prison for singing a popular South Korean song. There, she later testified at a U.S. Senate hearing, she was beaten so severely that she couldn’t stand for a month. After prison guards subjected her to sexual abuse "that cannot be imagined," Ji tried to commit suicide by swallowing sewage and cement. Ji eventually escaped North Korea, but there are an estimated 200,000 political prisoners still locked up in Kim’s gulag, where inmates are routinely murdered through starvation, torture or brutal forced labor. North Koreans are condemned to these hellholes for such "crimes" as complaining about living standards, practicing Christianity or neglecting to dust a picture of Kim Il Sung.
"Through our music, through our art, we will be able to express our friendly feelings to North Korean artists and the North Korean people," Maazel said in a toast at the People’s Palace of Culture in Pyongyang last week. Even assuming that ordinary North Koreans heard of the philharmonic’s visit-the main government paper reported it below the fold on page four-they were not likely to have drawn much solace from it. To someone who can be executed for possessing a Bible or tuning a radio to a foreign station, of what importance is it that a famous American orchestra performed for a group of government loyalists? It is not news to Kim’s subjects that Communist Party cronies enjoy foreign luxuries most North Koreans are denied.
Maazel says that concerts like last week’s have "the potential to nudge open a door that has been closed too long" and that "the presence of foreign artists, especially American," reassures the victims of totalitarian despots that they have "not been forgotten." So what will he and the philharmonic do for an encore? Play Darfur? Zimbabwe? Would they have entertained Pol Pot and the Khmer Rouge inner circle? Adolf Hitler and the leaders of the Gestapo?
The way to let the citizens of unfree nations know they have not been forgotten is to speak in their defense: to reproach, not play along with, the dictators who oppress them; to broadcast the names of the jailed and abused; to publicly proclaim solidarity with the victims. Maazel had the opportunity to strike a blow for decency and freedom. All he did was strike up the band.