In a long bleat in The Australian “Pulping our poetry” (07 Jul 07) Rosemary Neil lamented big publisher’s lack of interest in Australian poetry. She cited a study by University of Queensland Press poetry editor, Bronwyn Lea, who noted a fall of more than 40 per cent in the number of poetry books being published. Lea’s study finds that “in the years between 1993 and 1996, more than 250 books of poems were published in Australia each year. By 2006, this figure had been reduced by about 100 titles.” Today, Lea says, the vast majority of local poetry titles come from small, independent presses. Some “punch above their weight”, winning prestigious literary prizes or attracting big names. According to Lea, however, many independent poetry presses “do not have sufficient access to resources, distribution and marketing to have their books noticed by readers. Under these conditions, the thus far unchallenged maxim that ‘poetry doesn’t sell’ becomes self-fulfilling.”

Lea, a poet and academic, believed UQP to be the only large, mainstream publisher that still maintained a formal poetry list. UQP publishes five or six poetry titles a year and has on its list eminent poets such as John Tranter and David Malouf. Malouf’s first poetry collection in 26 years, Typewriter Music, was released in hardback at the 2007 Sydney Writers’ Festival. Within three days, its print run of 3,000 had all but sold out. Lea says this shows that—contrary to popular belief—if poetry is properly marketed, it will connect with readers. Her study, published in the new UQP title, Making Books, retraces how “the 1990s heralded a new ethos in Australian book publishing: poetry was no longer presumed to be a prestigious staple on the list of a serious publishing house.

Neil asks, “While we like to profess reverence for dead poets from Shakespeare to Paterson, could it be that readers have little time for living poets?”

I have read a lot of Australian contemporary poetry, trying to acquaint myself with it and trying to get up to date. Some times, rarely, I find a poem that speaks brilliantly. I am well educated and well read, yet more often than not, I find myself irritated by contemporary poetry as it is literally meaningless—that is, the words fail to convey any meaning or image to to me as reader; they are simply … words.

If poets cannot write poetry that has meaning to the reader (or listener) they will remain unpublished or their publications will be pulped, and deservedly so. If it’s good enough, it will sell.

Even apparently good poetry can be obscure. Newcastle Region Art Gallery had an exhibition/webpages of poems by Australian poets responding to paintings in its collection. Some of these made sense to me, some didn’t. In this example, distinguished poet Les Murray responded with his poem Definitions to Dale Hickey’s Painting 1968. It’s a fine poem. Yet it is only because I happened to know a small amount about the Household Division that I could catch a relationship between the painting and the poem. It’s all very well for poetry to mean something to the writer, but it must have meaning to the reader. Here Murray, at least, succeeds. Too many poems sadly have no meaning for anyone. 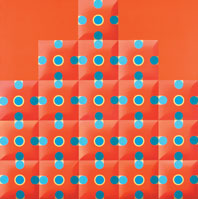 Definitions
Effete: a pose
of Palace cavalry officers
in plum Crimean fig,
spurs and pointed boots,
not at all the stamp
of tight-buttoned Guards
executing arm-geometry
in the shouting yards,

that has carried his cohort
to this day, and now will test them:
You have to kill them, Giles,
you can’t arrest them.
—Les Murray 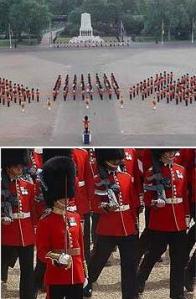