The voyage of the RMS Titanic is a much analysed tale of innumerable ironies and tragedy in the classic sense – a fateful consequence of human hubris and vanity. James and I were in Sydney for a weekend in 2006 to see Titanic: A new Musical at the Theatre Royal. This picture from the program is one of the best I’ve seen of the ship; it shows how sleek she was. 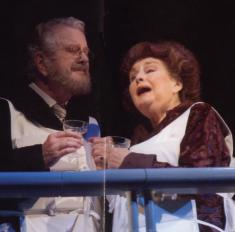 Though principally an ensemble piece, Titanic gives some performers a chance to star briefly. All were good. James and I enjoyed opera veterans Joan Carden AO OBE and Robert Gard OBE as the devoted wealthy elderly couple Ida and Isidor Strauss.

Alexander Lewis’s singing as stoker Barrett was superb, for example as he proposed to his distant love via the shy radioman Harold Bride, performed by Harold Willis. Though given only second billing, he has more songs than anyone else in the cast and renders them with tuneful strength.

Only one scene features dance. Adam Williams was eye catching, dancing a ragtime number with Siobhan Ginty, as Roberto and Mirella Da Micos, ship’s entertainers. Perhaps he was helped by the extra strong coffee I saw him buy just before the show. 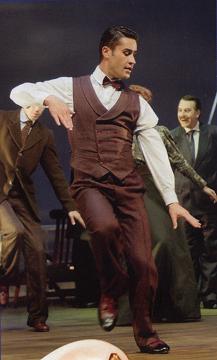 The ensemble pieces were the particular musical strength of this show, with the parts woven together to seem almost choral. In the final number the whole company sings again the almost-hymn with which they despatched Titanic on its first and last voyage:

Farewell, farewell
Godspeed, Titanic . . .
From your berth glide free!
As you plough the deep,
In your arms I’ll keep.
Safely west
May you carry me.