O sacred limbs lie sleeping and I will lay aside my weeping.
Lie still, lie still. I too may rest, I may rest in peace.
The grave that was appointed you
to close the sum of suffering due
shall be my path to heaven
from hell my full release. 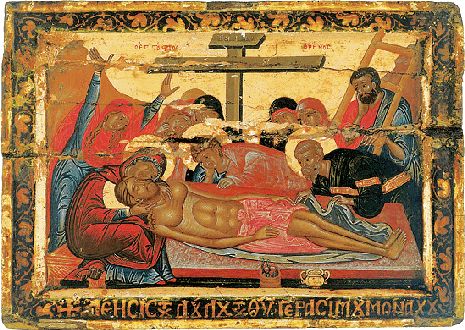 In the orthodox tradition, the Plashchanitsa (Russian) or Epitaphios (Greek) is placed before the sanctuary on Good Friday and venerated on Good Friday and on Holy Saturday until the Resurrection service. It depicts the dead Christ lying supine and being prepared for burial. In his oration “This is the Blessed Sabbath: reflections before the Holy Plashchanitsa Icon” Bulgakov treats it as a depiction of Christ’s repose, his Sabbath, in the grave.

The Lord is in the grave, and we stand at the grave. Once again God is resting from His works and enjoying the rest of the sabbath. Trembling, heaven and earth have bent down to the Lord’s grave. In this solemn quietude, in this audible silence, in this radiant sorrow, our poor soul too contemplates, weeps, prays.

The Lord is a lover of human beings. He came to save His creation, to call to life the seed that had fallen into the earth and was dying. . . . The Father sent and the Son went-to receive death. The mind is torn apart by contradiction and grows weak before the mystery.

The Lord is a lover of human beings. . . . This grave is the revelation of God’s love for man; it is the gift of the insatiable sacrificiality of this love: to give all for love, so that nothing remains ungiven. “Greater love hath no man than this, that a man lay down his life for his friends” (John 15:13). And here the Creator, having assumed the human nature, lays down His life for His creature.

. . . The time for a new sabbath arrived: the Lord, who previously had rested from the works of creation, now rested also from the works of salvation. This grave, the apparent victory of death, is the victory over death. There is no darkness of death, for in the latter is concealed the light of the resurrection, the radiant peace of the divine sabbath. The gates of hell are open; the path has been followed to the end and sanctified, for He is with us in death as well, and in death as well we are not abandoned by Love.
—Serguis Bulgakov. Churchly joy: Orthodox devotions for the church year, trans Boris Jakim. (Grand Rapids: Eerdmans, 2008) pp. 105-107.