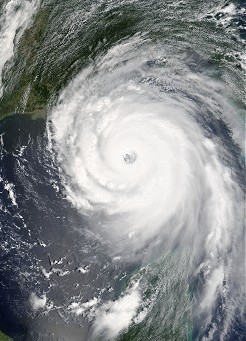 Like many others, I’ve been wrestled with my thoughts in response to Hurricane Katrina’s devastation of New Orleans. The hurricane was simply a natural physical process, glorious yet terrible. We cannot avoid sometimes serious loss of life through natural and accidental events. To pretend otherwise is simple arrogance.

The moral, sinful, dimension of the story begins with the human foolishness that failed to prepare for an entirely predictable event, that placed life and wellbeing at risk without justification. As Jeff Sharlet writes in The Revealer,

[I]f this is a religion story, it’s not about an act of God or the banal use and abuse of the Bible as substitute aid for people dying of literal thirst; it’s about sin. And no vague, blustery “pride of man” stories about ill-preparedness or mistakes by the Army Corps of Engineers will address the original sin of this event. We need theologically-charged, morally outraged, investigative historical reporting to tell us why and how the dead of New Orleans died, and when their killers – not Katrina, but the developers and politicians and patricians who are now far from the city – began the killing. It wasn’t Monday, and it wasn’t last week. We need journalists, not just historians, to look deeper into the American mythologies of race and money, “personal responsibility” and real responsibility. This isn’t a religion story because God acted, but because people acted. It’s not about what they didn’t do, it’s about what they did do, under the cover of civic development and urban renewal and faith-based initiatives that systematically eradicate the possibility of real, systemic response to a crisis that is more than a matter of individual souls.

The root of the word ‘religion, religare, tells us what kind of religion story can be reported from the Superdome. Religare means “ties that bind.” Those should be bonds of community. But in New Orleans —and in every other poverty-stricken city in America—they’re chains.

Anthea Butler, a historian of African-American religion at the University of Rochester, describes the events as ‘genocide’.

The port that took in the bodies and souls of Africans to enslave them in America is the same place in which their descendents are dying because of the neglect—and virtual genocide—foisted upon them by a lame duck and lame president and an ineffectual government. Read it all. 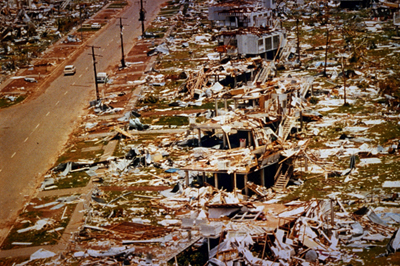 I do not want to take a ‘holier than thou’ stance here. Far from it. Hurricane Katrina must remind many Australians of Cyclone Tracy, a small but unusually intense tropical cyclone that passed directly over the northern city of Darwin on Christmas Day in 1974.

Many were poorly prepared. Wind speeds measured at over 217 km/h and the loose design of many buildings resulted in the almost complete destruction of the city. Darwin was evacuated by air and road and placed under military command. Evacuation was difficult as the distances between Darwin and Australia’s other cities are great. Over three-quarters of the city’s people left. Darwin was eventually rebuilt, with better attention to building quality and disaster planning.

Australia’s Aboriginal peoples have long understood how to live in a harsh landscape. The rest of us are learning slowly. There are hazards from storm, flood, fire, earthquake and drought. Drought is the most devastating in the long term. Whole suburbs of Canberra were burnt by bushfire recently. Much of the city of Newcastle was flattened by earthquake not so long ago. I believe we are ever so slowly coming to understand that these things are part of living in a “wide brown land”, though our conservative federal government actively prevents change.

From the huge-scale to the parochial: the mission statement of my local Anglican diocese of Canberra and Goulburn attempts to get to grips with some of these challenges. It calls on us to:
proclaim the gospel;
provide for the worship of God;
baptise new believers and teach and nurture all believers;
respond to human need through loving service;
seek to transform the unjust structures of society; and
strive to safeguard the integrity of creation.

Living in Australia has taught us that justice and fairness are bound up with respect for the natural environment. All Christians concerned for human need are challenged to a radical criticism of unjust and incompetent social structures and politics.

Lord of grace and gentleness, we pray for a world in which even ordinary humanity fails so often.
We pray for those who are called government ministers—servants—in every nation.
We pray that those who lead and take on great responsibilities may not simply wish to seem great in the eyes of others, but may genuinely serve their peoples, searching for policies and strategies which will be for the good of all, especially for the weakest and most vulnerable.
We ask this for the sake of him who is both servant and Lord, Jesus Christ. Christopher Avon Lamb.