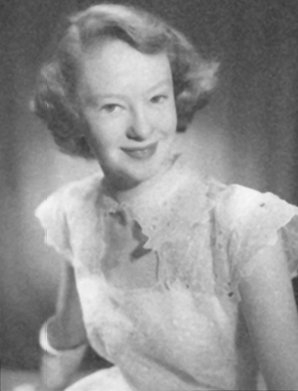 6 June is the feast of St. Dorothy; not a day well noted in church calendars. She is probably apocryphal and her cult was suppressed by the Vatican a decade ago. I’m reminded of her by the St. Dorothy’s Day mass held in Melbourne yesterday for Midsumma. But I’m especially observing St. Dorothy’s feast to pray for my aunt Dorothy, my father’s younger sister and a special friend. Dorothy and her late husband, Geoff, were very kind to me as a young child and I have had a special affection for them both. This photo was tken when she was a teen and I was only a toddler.

According to legend St. Dorothy (Dorothea) was a virgin martyred at Caesarea in Cappadocia in about 313 CE, during the persecution by Emperor Diocletian. As she was on her way to execution, a young man named Theophilus jeered at her and taunted her for her piety. “Send me fruits and flowers the garden you speak of, where you are going to your bridegroom.” As Dorothy knelt in prayer before the executioner’s block, an angel appeared before her with a basket of three apples and three roses. After she died, the basket was delivered to Theophilus, some say by the angel and some by a child. He was immediately converted and later was martyred.

St. Dorothy is usually represented with the basket of roses; sometimes there are also apples. She is the patron of brides, gardeners, florists, newlyweds; against lightning, fire, and thieves.

The veneration of Dorothy was strong in medieval Europe and there are some fine works of art depicting her (and some kitsch, too). This wooden sculpture, for example, from the Rijksmuseum. The sculpture, 38cm high, by the Master of Koudewater, was probably for one of the cells in the Mariënwater cloister. 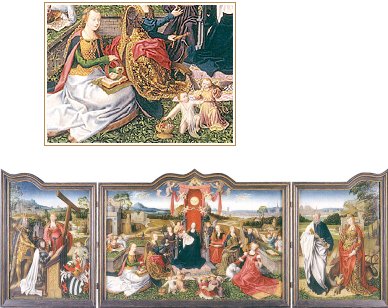 One of the oldest European pieces in the National Gallery of Australia, here in Canberra, is a 16th century altarpiece Triptych of the Virgin and Child with Saints. Cologne School c.1510-20 . The centrepiece depicts the Virgin and Child enthroned within an enclosed garden, flanked by angel musicians and six female martyr saints. To her left are Saints Agatha, Katherine and Dorothy (with chaplet and child with basket of flowers – detail), and to the Virgin’s right are Saints Barbara, Cecilia and Agnes.