James Stanford Anderson was born on 27 November 1899 in Coburg, Victoria and was a driver in civilian life. In Melbourne, he enlisted for overseas service in the Australian Imperial Force on 26 January 1918, aged just 18 and 2 months. It required the written permission of his parent, John Slater Anderson, for Jim to be enlisted for active service while under the age of 19.

After some weeks at the recruit depot in Broadmeadows, 50420 Private Anderson embarked from Sydney aboard HMAT A18 Wiltshire on 10 June 1918. During his time at the depot Jim had attempted to qualify for the Light Horse, which required tests of horsemanship. He regretted being separated from his mates who had passed the tests. 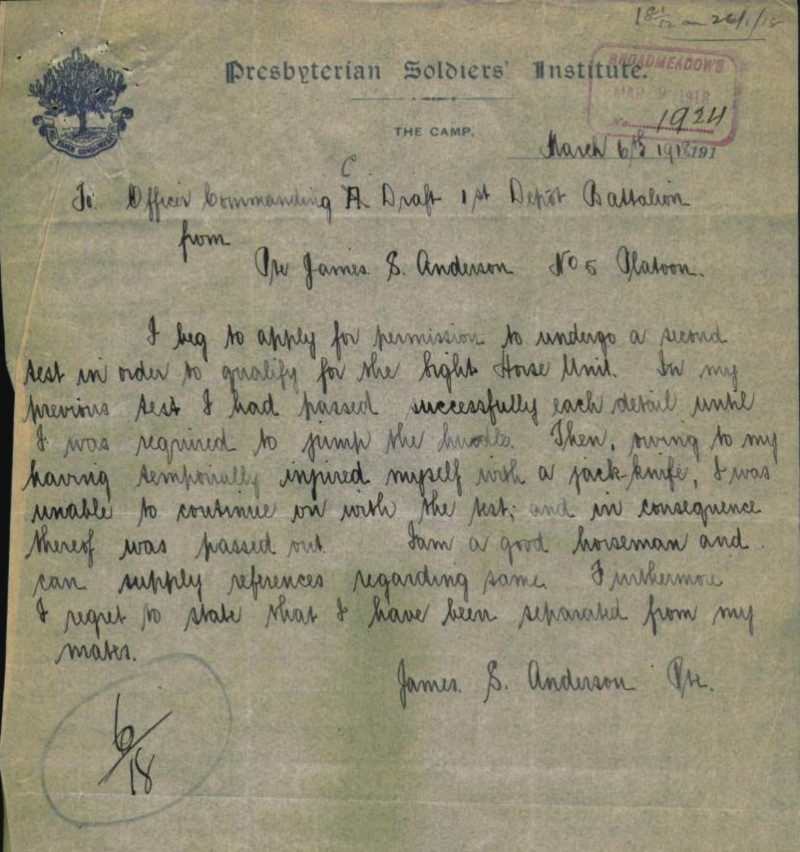 Jim disembarked at Suez on 17 July and on 20 July “marched in” at the Central Training Depot in Mosscare. Two months later he was an Acting Corporal “without pay”. On 12 November, the day after the war ended, his wish was fulfilled and he was allotted to the 4th Light Horse Regiment, joining them in Tripoli as a Trooper on 30 November.

Jim left from Kantara, Egypt for Australia aboard HMAT Essex on 15 June 1919 and was discharged at Broadmeadows on 9 August 1919. He was awarded the 1914-18 Star, the British War Medal and the Victory Medal.

Victor Lee Anderson was on 31 March 1888 in Balmain NSW and was a labourer in civilian life. He enlisted for overseas service in the Australian Imperial Force on 29 October 1917. Vic had previously been refused enlistment in the AIF on medical grounds. Instead he had served for two years in the Army Service Corps in Australia. This time he was assessed as “fit for transport duty” and appointed to the 1st Remount Unit as a driver, service no. 2, for “voyage only” on board the Chindawarra. The Chindawarra left Melbourne on 3 November 1917, voyaged to India and returned. Vic was discharged in Melbourne on 7 January 1918 “on completion of duty” and returned to his wife Edith and their child. He had served just 5 days at home and 66 abroad but was awarded the 1914-18 Star, the British War Medal and the Victory Medal.

The remount units were responsible for the care and training of the horses that became part of the Light Horse regiments and their delivery to the regiments. When the Light Horse left for Gallipoli in 1915, they left behind detachments to take care of the horses. To free these the men to rejoin their regiments, remount units were formed in September 1915, each of four squadrons. The maximum age for enlistment was set at 50, and the units contained a high proportion of veterans and expert horsemen. As many Light Horsemen were redeployed to unmounted combat, the Remount units were reduced. In late 1917, however, they delivered remounts to the Palestine front. My great uncle most likely had a small part in that task.

2556 William Albert (Will) Anderson (1897-1973) enlisted in the AIF on 12 June 1915, about six weeks after the Gallipoli landings. He was only a few days past his 18th birthday. He was been working as a clerk and had bee a cadet for four years. He was assigned to the 8th reinforcements of the 7th Batallion. On 7 Janauary 1916 he disembarked HMT Empress of Britain at Alexandria in Egypt and joined his battalion.

Life must have been frustrating sometimes. On 17 February Will was charged with “Obscene language in the presence of an officer” and subjected to one day of Field Punishment no. 2 which consisted of heavy labouring duties, possibly being restrained in handcuffs or fetters, but not attached to a fixed object, as well as loss of pay.

Eventually, he embarked from Alexandria on a troopship, arriving in Marseilles France on 31 March 1916

Also named William Albert Anderson (1875-1954) was the uncle of my grandmother, her father’s brother. He enlisted in the AIF on 5 May 1915, at the age of 39 years. William embarked from Sydney on HMAT A63 Karoola on 16 June 1915. He was assigned to 4 Infantry Battalion as part of its 6th reinforcement with regimental no. 2278.

The 4th Battalion was an infantry battalion of the Australian Army. Originally raised as part of the First Australian Imperial Force during the First World War, the battalion formed part of the 1st Brigade, attached to the 1st Division. During the war the battalion fought at Gallipoli and in the trenches on the Western Front, before being disbanded in 1919.[
The 4th Battalion took part in the Gallipoli landings on 25 April 1915. The 6th reinforcement including William Albert Anderson joined the 4th Battalion, part of the 1st Brigade, 1st Division) on 4th August 1915. Between 6 and 10 August 1915, the 4th Batallion took part in the Battle of Lone Pine — a diversionary attack to draw Turkish attention away from the main assaults being conducted by British, Indian and New Zealand troops elsewhere, known as the August Offensive. Despite the Australian victory at Lone Pine, the wider August Offensive failed and there was a stalemate until the allied forces were withdrawn in December 1915.
During the battle, on the 6th or 7th of August, William received a bullet wound in the fingers of his left hand. He was evacuated onboard HMS Ascania on 7 August and arrived in Alexandria on the 11th. He was admitted that day to the 1st Australian General Hospital at Heliopolis and then transferred to no. 3 Auxiliary hospital. He was to be sent home, having lost the use of his arm. On 4 September he left Suez on the Ulysses arriving in Melbourne on 9 September. He was discharged on 22 May 1916 and awarded a war pension of £3 per fortnight. He died on 13 March 1954