Ironically, achievements in war are often better documented than achievements in peace; my maternal grandfather for instance, William Hitchcock. Though he was a mere corporal, one can find out quite lot about his wartime experiences in the superbly maintained records of the Australian War Memorial, such as this entry in the Nominal Roll of the Australian Imperial Forces, Australia’s army in WWI. 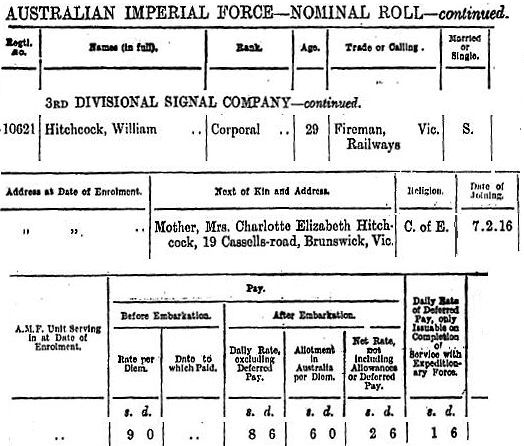 On 2 February 1916, the Australian government agreed to form a Third Division to increase its contribution to the allied armies in France and Belgium. The Third Division was formed in Australia in March 1916 and moved to England to train in July 1916. Its commander for most its war service was Major General Sir John Monash. In December 1916 it became the last Australian division to move to France, taking over part of the sector near Armentieres. 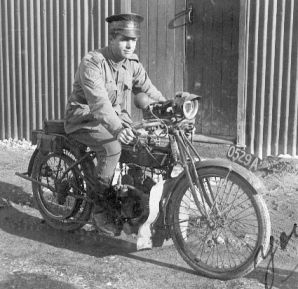 The 3rd Division Engineers consisted of 9th, 10th, 11th Field Companies and the 3rd Division Signals Company. A member of the Signals Company was my grandfather, 10621 Corporal William Hitchcock, a motorcycle despatch rider in a platoon attached to General Monash’s headquarters. Bill was spared the worst horrors of the trenches but, as a message carrier, was often a target for enemy snipers.

In June 1917 the Division participated in the battle of Messines and in October the battle of Broodeseinde alongside the veteran First and Second Divisions. On the 12th of October, the Third Division was repulsed at Passchendaele. In March 1918 the Third was rushed to the Somme region to stem the German offensive there, halting their advance at Morlancourt and Villers Bretonneux. Holding the high ground north of the Somme River, the Division was involved in a series of “peaceful penetrations” around Sailly-le-Sec. Later the Third Division fought in the battles of Hamel, Amiens, Mont Saint Quentin and the Hindenburg Line. 3rd Division casualties included 4,542 killed in action: 1,678 died of wounds, 554 other deaths, 1,616 taken prisoner, and 24,188 wounded, including my grandfather, who was gassed—a total of 31,123. They are remembered by a memorial at Sailley-le-Sec.

Bill and his comrades embarked from Melbourne, Australia on HMAT Ascanius, ship no. A11, on 25 May 1916. The first of these pictures by J.E. Barnes shows the ship at the warf in Port Melbourne and the others show ist subsequent departure from Melbourne on 27 May 1916. A11, Ascanius was a ship of 10,048 tons, speed 13 knots, requisitioned from the Ocean Steamship Company Ltd of Liverpool, England.

After the Armistice, it was to be many months before enough shipping was available to bring the last of the Australians home. While awaiting transport, some men took advantage of the opportunity to travel around France and Britain. In Britain, Bill Hitchcock met Judith, who was to join him in Australia as his bride. Bill left England for Australia on 13 July 1919.

Bill took part in an ANZAC Day march every year until he was too old to do so and was a staunch member of the Returned Services League from the end of the Great War until his death in 1978 at the age of 92. 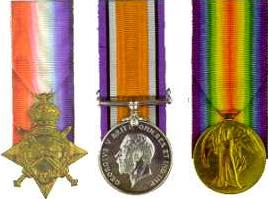