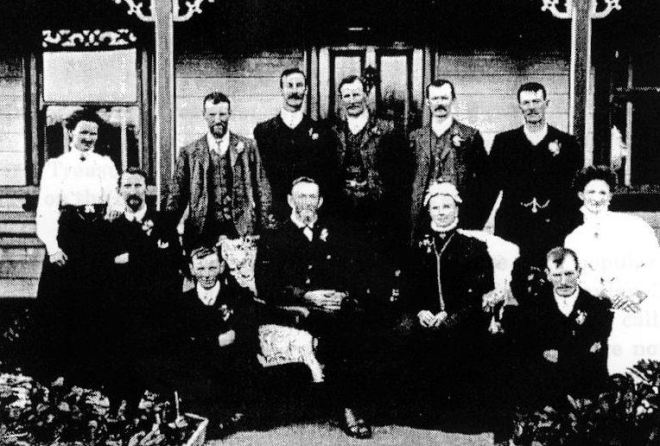 This is a picture of the 50th wedding anniversary celebration of Robert and Euphemia McKinlay at Clifton Park, Otago, New Zealand, in 1909.

Robert and Euphemia and their 10 day old daughter, Mary, traveled from Scotland to New Zealand in 1860-61 on the newly built ship, the Lady Egidia. Robert and Euphemia had eleven children and many grandchildren and were the brother and sister-in-law of my great-grandfather Donald McKinlay (1840-1926). Thus I have dozens of distant relatives in New Zealand, none of whom I have met.

Robert was born on 24 Dec 1835 at Rhu, Dunbartonshire, Scotland. He was an apprentice baker in Helensburgh. He married Euphemia Buchanan, daughter of John Buchanan and Mary Miller, on 25 Nov 1859.

Robert and Euphemia settled at Clifton Bank, Port Molyneux, South Otago where Robert was first employed by Messrs Hunter & Harvie of Balclutha. Later, Robert and Euphemia’s names appear on the communion roll of the Inch Clutha/Stirling Presbyterian Church in June 1873, the year they arrived at InchClutha. Over the next few years three of Robert and Euphemia’s children’s names appear on the roll; Jane in 1874 at age 12, Mary in 1878 at age 18 years was next and followed by Parker in 1892. On 4th October 1884 Robert was ordained an Elder of the Church.

In 1868 “it was resolved as soon as possible to move the Inch Clutha church to a more convenient site.” and Robert’s tender for £47/18/- was accepted. In 1873, tenders were called for the building of a new two-storied wooden Manse – again the lowest tender of £495/10/6 was from Robert McKinlay and a Mr Arrol. In 1869, under contract to a local committee, Robert built the Te Houka school building for £179/10/- of which £150 was a grant from the Otago Education Board. At the turn of the century, Robert was the builder of the Church Hall. His age at this time would have been 65 and he was still working hard. The hall building was to be 60ft long, 26ft wide and 14ft in height, included an anteroom and stage, and was completed in seven months. Robert also constructed an additional rooms for the local school, for £224 and £169.