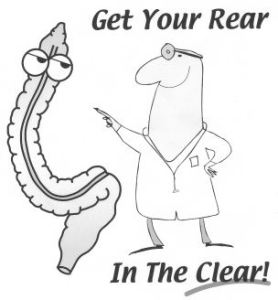 A dear friend of mine died of colon cancer a while ago, after failing to get a check up often enough. My family has a history of long life, but it is internal cancer that has been the main cause of death for those who have had shorter lives. So I’m acutely aware of the need for examinations and check ups! Yes, preparation for colonoscopy is unpleasant, but it may save your life.

In Australia, close to 90% of people diagnosed with colorectal cancer at the earliest stage are alive five years later (if other causes of death are excluded). It is the most commonly occurring cancer in Australia (excluding non-melanomic skin cancer for which data are not available), and the second most common cancer-related cause of death. Colorectal cancer has features which set it apart from most other cancers. Most cases are thought to originate in benign lesions (adenomas), which can be detected and removed. Once a cancer develops it remains localised for a relatively long period, with a high proportion of people surviving five years after diagnosis if their cancer is detected and treated at this early stage. However, most cases are detected at a later stage and so, overall, close to 60% of people diagnosed with the disease survive five years (if other causes of death are excluded). This from IHT 22 Sep 2008.

No more excuses for putting off a colonoscopy

If you’ve shied away from getting a colonoscopy to screen for colorectal cancer, two new studies may make you less reluctant. One study found that if a first colonoscopy is normal, patients can safely put off having another test for at least five years-and many experts would say at least 10 years. The other study found that so-called virtual colonoscopies, which use CT scans, are roughly as accurate as more intrusive colonoscopies at detecting dangerous growths.

Put those two findings together with colonoscopies’ proven ability to detect cancers and pre-cancerous growths, and there’s no excuse for procrastinating. In a standard colonoscopy, the doctor sedates a patient and then inserts a long flexible tube with a tiny camera at its tip into the rectum to view the interior lining of the colon. In a virtual colonoscopy, the doctor uses a CT scanner to produce detailed images of the colon’s interior. No sedation is required. In both cases, the patient has to take a laxative the day before to cleanse the colon for proper examination.

A large multicenter trial of 2,600 patients in the United States sponsored by the National Cancer Institute has just reported in The New England Journal of Medicine [1] that virtual colonoscopies detected 90 percent of the cancers and precancerous polyps that had been detected by standard colonoscopy. The Cancer Institute deemed this "comparable accuracy."

A second study, also supported by the government and reported in The New England Journal, [2] looked at patients who had returned for a follow-up colonoscopy five years after getting a clean bill of health. Not a single cancer was found among 1,256 patients at the follow-up exam, and only a minuscule number of advanced polyps, whose likelihood of becoming cancer is not known.

This study did not assess the effect of waiting 10 years between standard colonoscopy screenings-the interval recommended by the American Cancer Society and some professional guidelines-but the failure to find a single cancer after five years suggests that the 10-year interval may be reasonable.

Colorectal cancer is the third most common cancer in the United States, with an estimated 154,000 new cases last year, and the second most lethal cancer, causing 52,000 deaths last year. Yet a majority of Americans aged 50 or older fail to get screened. The chief importance of the two new studies may be their potential to entice more people to undergo screening that could save their lives.

In its editorial, the New England Journal observe

Screening for colorectal cancer has lagged behind other cancer screening, but it is now in a dynamic phase. New screening tests are available, and there is stronger evidence of their effectiveness. Screening rates in the United States have increased and are approaching the rates for long-established screening programs for breast and cervical cancer. The objective of screening has shifted from the early detection of cancers to prevention by means of detection and removal of adenomas, the precursors of most colorectal cancers. [3]