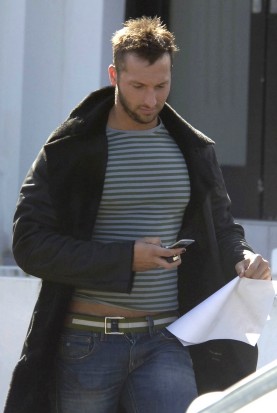 Perhaps this 2005 picture of a certain much respected Australian sportsman (which he probably now regrets) bears out the words of Australian punk rocker turned jazz crooner Ignatius Jones,

But as I loathe obligatory uniformity and conformity in clothing, I say that the certain much respected spunky Australian sportsman ought be able to enjoy wearing (or not wearing) what he pleases, black finger nails and all, without silly conclusions being drawn as to his sexuality, his fashion sense, taste or any other such rubbish.

[O]ne of the most fundamental rules of Hip is that: Public Opinion Is Vulgar; Conventional Wisdom Is A Contradiction In Terms – You Have Better Things To Do. . . . Public Opinion, or Herd Mentality, sucks for One Big Reason: it is a substitute for thinking. All that the Pseudo-Hip have done is replace the mentality of the Large Herd with that of a smaller, much groovier get-down far-out Herd. They are still Lemmings.

That’s where Mr Thorpe wins out; he thinks (though perhaps not when he chose these clothes) and says interesting things.