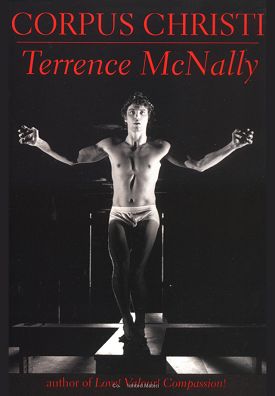 Corpus Christi is a passion play by Terrence McNally dramatizing the story of Jesus and his disciples, depicting them as gay men living in modern day Texas. The play shows Jesus solemnising marriage between two ot the apostles. Judas betrays Jesus because of sexual jealousy. It has been praised by critics, yet condemned by some people as blasphemous. It was first directed in New York City by Joe Mantello, opening 13 Oct 98.

The play opened at the New Theatre in Newtown on 7 Feb 08 as part of the Sydney Gay & Lesbian Mardi Gras. New Theatre’s Artistic Director Louise Fischer said that

Corpus Christi was written in a quest to find humanity in religion and to explore the universality of God’s love. We are not exploiting or trivialising religion or the Christian faith but rather exploring the attitude of the church towards homosexual Christians. The decision to stage [the play] was not taken lightly and was based on . . . our commitment to producing theatre that not only entertains but has artistic merit and provokes robust debate. It is a metaphor for the power of Christ’s message to show tolerance and love in the face of bigotry and hatred.

The Anglican Bishop of South Sydney, Robert Forsyth, questioned the integrity of Corpus Christi and expressed his outrage at the “unhistorical and untrue” depiction of the son of God and some of his disciples as homosexual. “It is deliberately, not innocently, offensive and they’re obviously having a laugh about it,” he said. “It’s historical nonsense and I wouldn’t want to go and see it. Life’s too short.”

Director Leigh Rowney, a Christian, defended the play, denying that it mocks Jesus.

I think it humanises Him in a way Christians might find difficult because we like to believe God and the son of God are ultimately divine and above all of us. I wanted this play in the hands of a Christian person like myself to give it dignity but still open it up to answering questions about Christianity as a faith system. . . . I’m directing the play because I wanted to explore what I believe is a problem with contemporary Christian communities where gay people feel unwelcome. I want to believe in a God of love and a God of compassion, and I dont want to believe that by virtue of your birth and your DNA … you are damned for all time because you just don’t fit. That is not a way I want to live and it’s not a belief system I want to embrace. I believe that Christianity can embrace homosexuals and that you can be actively homosexual and have an open relationship with the Christian God. … If yours is a living and functional faith thats going to contribute something to the world, which it should be, you’ve got to embrace the possibility of including other people.

Like Mary, this play is pregnant with satirical possibilities. We wait for a comment on how the heartland of Neo-Conservative America has used Jesus’ teachings to justify their every piece of censorship or act of war. What would Jesus say to all these groups of politicians and priests? Shame then, that the play continually goes for cheap and obvious gags (“Oh Jesus Christ”) and the few references to gay bashing and queer marriage are done for shock value rather than to make an interesting point. The play also suffers from numerous inconsistencies in time and geography. Are we in the present or the year of Christ’s birth and can someone please tell me what Roman centurions are doing in the middle of Texas? 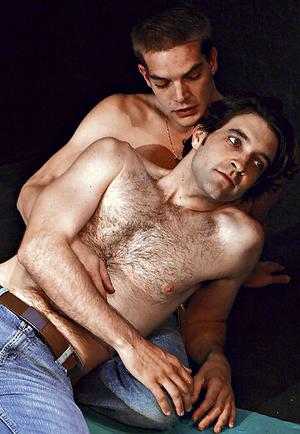 As you might expect, the play follows the story of Jesus (Harley Connor) from the nativity scene to the crucifixion. Curiously, the first half of the play spends a lot of time at Jesus’ high school graduation where he meets Judas (Matt Rossner) and discovers gay love for the first time. This lengthy scene resembles a pedestrian high school comedy. The play picks up marginally in the second half when Jesus gathers together his devoted twelve and his blazing trail of sermons and miracles gets under way. The most poignant moment in the play comes when the priests question the teaching of Jesus himself.

Corpus Christi is kept from bombing completely by its large cast (you can probably guess how many). The performance is energetic and physical. There is action all over the stage. As Jesus and Judas have an intimate conversation at the high school dance, others simulate fornication behind curtains. There is a fine moment when they all take that trade mark pose, during the last supper. The crucifixion scene is one of the few dramatic movements in the play. Jesus’ fear of taking the path God has laid out for him becomes real and palpable. Christ on the cross makes an imposing figure, centre and back of the stage.

With Mardi Gras approaching, this play has an audience, but such a jumbled script is unlikely to speak to the broader community.

Well, I got a copy (Terrence McNally. Corpus Christi Grove, 1999. 0802136354) and read it. After reading McNally’s preface to the play, the idea of Jesus and many of his disciples being gay seemed to me as capable of being orthodox. For in some way (much debated by theologians) Jesus stands in place of us all in confronting and suffering the hurts and pains of us all (and sharing the God-given joys and pleasures as well). So, in a sense, Jesus is gay for the gay, straight for the straight, white for the Caucasian, black for the African, male and female — for the whosoever will.

And, as McNally says “Jesus Christ died again when Matthew Shepard did. Look. Remember. Weep, if you will, but learn. And don’t let it happen again.”

Picture: The cast of a 2008 production of Corpus Christi at San Diego’s Diversionary Theatre.

McNally best explains in his own Preface (which, of course, isn’t part of a performance)

I’m a playwright, not a theologian.

I was not mistaken. The level of the dislike of gay men and the vehemence of the denial of any claim they might make for spiritual parity with their Christian “brothers” that Corpus Christi revealed was disheartening. Gay has never seemed less “good.” Once again, we had not come a long way at all, baby.

Let me try again: If a divinity does not belong to all people, if He is not created in our image as much as we are created in His, then He is less a true divinity for all men to believe in than He is a particular religion’s secular definition of what a divinity should be for the needs of its followers. Such a God is no God at all because He is exclusive to His members. He is a Roman Catholic at best and a very narrow-minded one at that.

Jesus Christ belongs to all of us because He is all of us. Unfortunately, not everyone believes that.

Very few Christians are willing to consider that their Lord and Savior was a real man with real appetites, especially sexual ones. To imagine that He was not only sexually active but a homosexual as well is gross blasphemy. And they would deny others the right to conceive of Him as such. They do not understand that a good part of our humanity is expressed through our sexuality and is not exclusive of it. Such a concept is as alien to them as their notion of “sin” and “evil” is to me.

In their self-defense, they tell us they hate the sin but love the sinner. Nonsense. The sinner is his sin and in their eyes it is an abominable one. Naturally, they tried to suppress Corpus Christi with threats of violence. Just as naturally, the New York theater community said no to this attempt at artistic repression and the play went on as scheduled. I have never been prouder to be a part of that community. I owe them-we all owe them-big for this one.

However, at the same time that we were all feeling so good about overcoming these forces of ignorance and prejudice, a young man in Laramie, Wyoming, by the name of Matthew Shepard was losing his life to them. Beaten senseless and tied to a split-rail fence in near-zero weather, arms akimbo in a grotesque crucifixion, he died as agonizing a death as another young man who had been tortured and nailed to a wooden cross at a desolate spot outside Jerusalem known as Golgotha some 1,998 years earlier. They died, as they lived, as brothers.

Maybe I should say a few words as a playwright.

The production the play received at the Manhattan Theatre Club will remain, I suspect, the definitive one. Joe Mantello is a theater poet. The appellation “director” seems too circumscribed to describe what he brings to a production. His vision for the play was met on its own high terms by the extraordinary design team and cast he assembled prior to the first day of rehearsal. Our collaboration began with Love! Valour! Compassion! I can only think the best is yet to come. 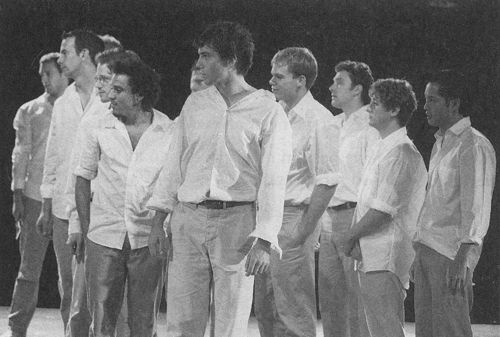 The original New York cast, from the published script.

Corpus Christi is a passion play. The life of Joshua, a young man from south Texas, is told in the theatrical tradition of medieval morality plays. Men play all the roles. There is no suspense. There is no scenery. The purpose of the play is that we begin again the familiar dialogue with ourselve Do I love my neighbor? Am I contributing good to the society in which I operate or nil? Do I, in fact, matter? Nothing more, nothing less. The play is more a religious ritual than a play. A play teaches us a new insight into the human condition. A ritual is an action we perform over and over because we have to. Otherwise, we are in danger of forgetting the meaning of that ritual, in this case that we must love one another or die. Christ died for all of our sins because He loved each and every one of us. When we do not remember His great sacrifice, we condemn ourselves to repeating its terrible consequences.

Look. Remember. Weep, if you will, but learn. And don’t let it happen again.

This time, I hope, I’m sounding like a human being.