Phillip Adams’s column in the Weekend Australian (12 May 07) is a superb refelection on the famed interview between Melvin Bragg and Dennis Potter.

Now. Get on with it 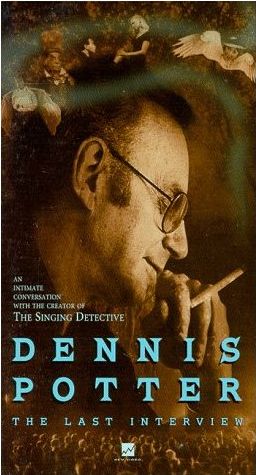 When Melvyn Bragg’s with dramatist Dennis Potter first screened 10 years ago I described it as the finest interview I’d ever seen. Having just chanced upon it again (on the arty pay-TV channel Ovation) I’d still rate it that highly.

It’s no criticism of Bragg to say he contributed little to the interview’s success. Melvyn couldn’t get a word in sideways. Having interviewed countless thousands, I know that the best interviews are often soliloquies. They can come from a professional celebrity such as Gore Vidal, so intent on skilfully repeating himself that your task is simply to welcome him and get out of the way. Or from a guest with an urgent need to use your studio as a pulpit or confessional. Dennis Potter, though justly celebrated, came in the latter category. His sense of urgency could not have been greater.

For the most famous writer in the comparatively proud history of British television was dying. He’d learnt a few weeks earlier that he was “riddled with cancer”, that treatment was futile, that his life expectancy could be counted in hours. In great pain (he kept swigging morphine from a flask), he sipped champagne and chain-smoked. He’d always scoffed at “No Smoking” signs and admonishments about alcohol — and at this stage cigarettes and plonk were scarcely a threat to his health.

In a medium gridlocked by its rules, genres and stultifying predictability, Potter had written such idiosyncratic masterpieces as Pennies From Heaven and The Singing Detective. Other works, on stage or television, had produced major scandals and accusations of blasphemy and pornography. Christian crusader Mary Whitehouse was infuriated by his depictions of Jesus and the Devil, while the tabloids dubbed him “Dirty Den” because of his candour about sexuality. But those of us who loved Potter admired not only a reckless originality, but his holy trinity of honesty, wisdom and compassion.

By the end of the hour with Bragg, Potter was swigging more morphine than champagne and was near collapse. Yet everything he’d said was radiant with excitement. He was totally alive, reminding us that life is always in the present tense, is always NOW! Oh, the past lingers in the memory and can be powerfully evoked, and the future waits. Though, as he pointed out with great good humour, that no longer applied to him. But life is of the instant, and his focus on the instant had never been more intense. He described sitting at his desk (he was determined to finish a couple of scripts before he died) with his writing punctuated by looks out the window, at some white blossom he’d seen every year. But this time, NOW, he marvelled at it. “It is the whitest, brightest, blossomiest blossom ever!”

This is a NOW. Now it’s a then. Now there’s a new NOW, and another new NOW is nigh. That’s life. One now after the other.

A lifetime ago I wrote that an awareness of our individual mortality is “a great aphrodisiac for living”. So I knew exactly what Potter meant. For both of us, that sort of living is habitual – and if there’s a place in the vocabulary for blasphemy it should apply to the complaint, the very notion, of boredom. How can anyone ever be bored anywhere at any time? Isn’t there’s always something to observe, to think, to feel?

Potter applied this intensity to his love of England. Not of Britain; he was repelled by its connotations of imperialism. He loved England and its “Englishness”. But he wasn’t xenophobic, fully expecting others to feel the same way about their countries and cultures. Yet there was much happening to his England and the English that he deplored. Admitting that he no longer saw himself as “of the Left”, that there were issues on which he felt conservative, and recognising that there were times the country had needed some radicalism from the Right, this son of a coal miner deplored the influence of Thatcherism and the destruction of the great achievement of the welfare state created by Labour governments after World War II. His comments on economic triumphalism, of values reduced to dollars, sound as relevant now as they were then.

And he deplored what was happening in the media—particularly to television, the medium that had nurtured him for so long. He saw little hope of Dennis Potters in the future. What organisation would have the patience?

Potter expressed no fear about finding himself dying at 58. “I haven’t shed a tear or felt a moment of terror since I learnt about it,” he said. He’d had a long history of illness – the singing detective, suffering and hallucinating in his hospital bed, was a self-portrait. The same disease had mutilated the hands that held his champagne flute and cigarette. Yet he was living, really living, in the NOW. As should we all.

Well said, Mr Adams. Living in the now is equally important to people of religion and people of none.