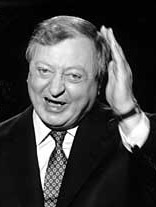 Graham Kennedy, radio and TV comedian and accomplished film actor (They’re a Weird Mob 1968, The Odd, Angry Shot 1978, The Club 1980, The Return of Captain Invincible 1982, The Killing Fields 1983, Stanley 1983, Travelling North 1987) died in May 2005 aged only 71. These are some extracts from Peter Gavin’s perceptive review of Graeme Blundel’s biography of Graham Kennedy, King: the life and comedy of Graham Kennedy (Macmillan, 2003, 500pp).

[Kennedy’s] career spanned 40 years. But the sad part is that he never seemed to find love or happiness. He was the ultimate showbiz trouper: there seemed no life beyond the next script or deal. Towards the end there was little left for the king to conquer. The story finishes with him ailing: sick and secluded. Loved by his friends and missed by his fans, he read the early chapters of this book and liked it, but decided he didn’t want to read any more because, as he says, "I know how it ends."
This Graham Kennedy is the one we know. Fast on his feet but remote, cranky, impatient with stardom, his constant quips revealing a hankering for applause. The man who wouldn’t swear in company yet built an individual comedy style around innuendo of the crudest kind, who alarmed the censors and amused the nation when he made a crow call that sounded like "Faaaarrrrrkkk!" on his national Tonight Show.
Blundell adds several extra dimensions to this tabloid feature image. Until now Kennedy never really seemed a figure of pathos, perhaps because Australia’s pop culture icons have eluded the kind of elaborate scrutiny on offer here. King is a sustained celebration of Kennedy’s gifts, but Blundell works in a motif of loss and regret and yearning so that every triumph is counterpointed with complex emotions. […]
Particularly deft is the way [Blundell] handles Kennedy’s sexuality. Blundell mirrors the comedian’s own elusiveness by never baldly advancing a thesis on the subject. Instead Blundell lets friends speak for Kennedy, a technique that is both subtle and compassionate. There’s a lovely moment when a friend tells how Kennedy would often call distraught after a relationship had failed. That the romance was homosexual is clear. (Read Queer Penguin’s post on ‘Gra-Gra’s’ sexuality.) But that revelation is secondary to the central dilemma of Kennedy’s life: his celebrity didn’t open up opportunities for sex or, as it happens, power or money. Instead, in Blundell’s chronicle, Kennedy seemed cowed by his fame. And, what is worse, there seemed little else in his life but fame.

Kennedy was just 23 when he moved to from radio to television, still new and untried in Australia, and launched In Melbourne Tonight. It was a take-off of the American ‘Tonight Show’ format, with the host presiding over sketches, introducing star turns and reading advertisements live. Kennedy transformed the live reads into a comedic art form, slagging off the sponsor’s products and extending the ads to the point of absurdity (one 20-second spot ran for over 20 minutes). The sponsors lapped it up and so did the audiences.
The shows were live-to-air and mostly chaotic and funny but sometimes self indulgent. Graeme Blundell writes,

He understood that it was the telling that was funny. There was no punch line as such, he would digress, he didn’t know where he was going, but it was just hysterical. It has to do with notions of reality and identity: who you are when you tell jokes, who are you telling them to, where does it come from, how do you summon it up? Comedians always think about those things, which is why the language of comedy is the language of death; they say things like ‘I died out there’, ‘We slayed them in the aisles’. Anyone who’s been funny for a living, and I have, can tell you that. It’s a terrible strain.

Television was introduced to Australia for the Melbourne Olympics in 1956. In the country, where I lived as a child, there was no reception and in any case TV sets were very expensive. I remember visiting my uncle in the city and staying up late to watch In Melbourne Tonight (in black and white). It continued until 1967. I remember it fondly and am sorry Graham Kennedy is gone.