One reason I found it hard to sustain any interest in the 2008 Olympics was the appalling quality of Network 7’s coverage. But two achievements among the many will stick in my memory.

The first was Jared Tallent’s achievement of bronze in the 20km walk and silver in the 50km, with astonishing stamina, a smile, and no self aggrandising fuss. A true Olympian.

The second memory to last was, of course, Matthew Mitcham’s thrilling gold in the 10m platform diving.

He kissed him briefly in the stands and gave him his Olympic bouquet. Later, outside the glowing blue Water Cube, Matthew Mitcham and his partner, Lachlan Fletcher, firmly embraced, both shedding tears. Next it was his mother Vivien’s turn to hold her golden boy, and more tears fell.

A stunning final dive that was awarded the highest score in Olympic history gave Mitcham the gold. She proudly said her son was a man of “firsts”. 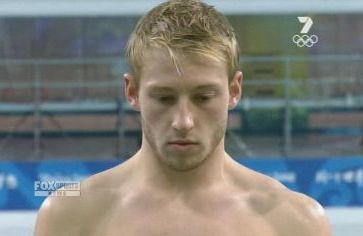 “Coming out publicly, that was a first,” said Vivien. “The highest score awarded to an Olympic dive ever, another first. How many more firsts can this child get? Can you find something else to be first in? He’s just done so well. He deserves it.”

Just as he has shown flipping around at 10 metres high, Mitcham has shown no fear about disclosing his sexuality. He was the first Australian athlete to go to an Olympics openly gay. 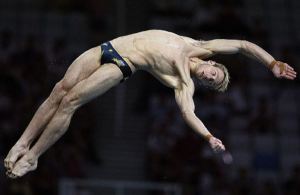 Carefully nursing Mitcham’s Olympic bouquet, Fletcher spoke of the incredible journey that the diver had taken to the top. Fletcher has been the one constant over the past two years. He was his rock when Mitcham retired in his late teenage years suffering anxiety and depression. He watched him become a stunt diver at the Sydney Royal Easter show, supported his fight back into the sport and now to win Olympic gold. 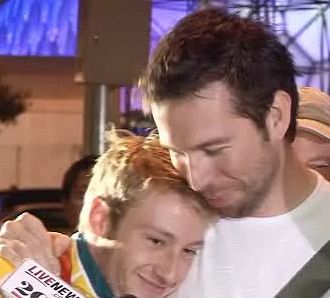 “It’s been so up and down,” Fletcher said. “When I first met him, he was pretty unhappy, he wasn’t liking the diving in Brisbane at all, he didn’t want to do it, wasn’t happy being there. It took a lot for him to retire and stop doing it because it had been his life for so long. He wanted to try and be happy again. He took time to do normal things that people do. Then after five or six months he started to really miss it again and he had the opportunity to dive with Chava [Sobrino, his coach]. He started that and loved it ever since, every second of it, which is great to see him happy all the time.”

Gay website Outsports.com said he was the only man among 10,500 Olympic athletes to publicly say he is gay. But his mother said while he has always been proud of his sexuality, Mitcham was initially concerned that coming out would affect him financially. “He was only hesitant because he was worried about that factor of sponsorship,” Vivien said. “It was a bit of a worry. But I think everybody has caught up now.”

Fletcher said that Mitcham, 20, was concerned that his sexuality would overshadow his diving achievements. He has become a pin-up boy gracing the covers of national gay magazines here and overseas. Gossip blogger Perez Hilton featured a shirtless Mitcham accompanied by the tagline: “Yum. Yum. Yum! Can we have a piece of that????”

But the almost perfectly executed back two-and-a-half somersault with one-and-a-half twists and a 3.8 degree of difficulty, earning 112.10 points, made sure people would be talking about his final dive that gave him gold. The Chinese home crowd gasped as Mitcham nailed the breathtaking dive.

“The biggest thing he was worried about was people paying more attention to that than his actually diving,” Fletcher said. “And I suppose that kind of did happen a little bit. Hopefully, now it won’t be so much of an issue any more.” 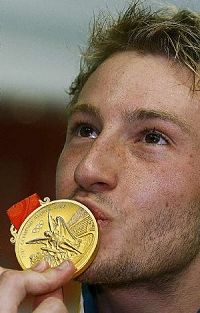 Sobrino, who was instrumental in reviving Mitcham’s career, was gobsmacked by the final dive. “It was his best dive and that’s why we put it at the end,” Sobrino said. “The expectancy of that dive was around 106 to 108 points. But not 112, never. He did it at the right time, at the right moment, in the right pool with the right crowd, so I’m pretty happy and we got the right medal.”

It was the eighth and last medal in a sport that China dominates and was expected to sweep. Mitcham cried and bounced around the pool deck before climbing up to the stands to embrace Fletcher. “It’s going to take a while to sink in,” Mitcham said. “My cheeks hurt from smiling. My face hurts from the chlorine. My legs are sore from jumping up and down. I’m in pain and I’m tired. But I’m so happy.”