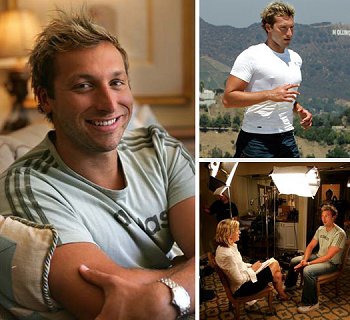 Ian Thorpe, five-times Olympic champion, one of the best swimmers of the modern era, once said he was alarmed by the relentless paparazzi. He claimed media scrutiny made him think about retirement every day. Thorpe, who says a desire for privacy drove him out of Australia, was stung to defend his weight by a report he lived on pizza, hamburgers and soft drinks. He continued to train 40 hours a week, he said, and enjoyed the tough regime.

I don’t normally have much time for Sydney tabloid, the Daily Telegraph and its Sunday stablemate, but the Sunday Telegraph is right when it opines that Thorpe had earned privacy and respect.

For some inexplicable reason, Australians seem to have a wildly equivocal love-hate relationship with our leading athletes. On the one hand, they are lionised and put up as inviolable objects of veneration, cast as solid-gold role models who can do no wrong, feted and fawned over in a manner that would be embarrassing if it weren’t for their achievements. And on the other, they can fall victim to the uniquely Australian syndrome, that of the "tall poppy": a condition in which they become veritable sitting ducks for vicious and bile-filled cynics and critics waiting to attack with unmitigated glee.

Witness one of Australia’s most successful and recognised athletes, and our most decorated Olympian, Ian Thorpe. In recent weeks, Thorpe has been the target of another newspaper organisation which ridiculed his physique, relied on unnamed sources who attacked his training ethic and commitment to swimming and questioned his "Hollywood" friends. Thorpe . . . has been almost besieged by those eager to paint a negative portrait of him, and has been forced in recent times to take extraordinary steps to protect his privacy, including moving to another country and taking evasive driving courses.

The stories about his fitness levels and diet were not just a cheap shot, they were wrong. There is now no denying that Thorpe is in swimming mode . . . the legendary swimmer is in excellent shape. . . . Thorpe has dedicated his life to swimming ever since he burst into public consciousness as a callow 14-year-old, and he has done it while graciously accepting the adoration of the public and the never-ending expectation that he continue to dominate the sport he loves, and the scrutiny of those who have questioned his sexuality and his lifestyle. It is important to note, too, that Thorpe has never let his country down, whether in the pool or out of it. Even when the pressures have been enormous, he has been a gentleman; he has made himself available to the public, and has given back to the community through his charity and community work.

He doesn’t deserve such appalling treatment. The man Australians have come to love and know as the Thorpedo deserves much better. He deserves respect for his past achievements, just as he deserves the space to enable him to concentrate on those that may be in his future.