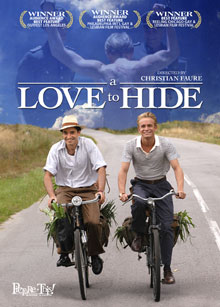 The Nazis murdered millions of Jews, but also hundreds of thousands of homosexuals, gypsies, mentally ill people and other so-called deviants. The deportation from France was a shameful memory for decades, but is now acknowledged and mourned by a Memorial to the French martyrs of the deportation, on the Île de la Cité which I visited in 1993. On 4 Nov 2006, Richard Waters wrote about the memorial in The Age; “a chilling memorial to one of the most tragic and arguably shameful episodes in France’s recent history.”

Located on the upstream end of the Île de la Cité the memorial sits low into the ground bordered by a long low wall and a lawn. It is hidden until you approach it and read the words “Memorial to the French martyrs of the deportation; 1945.” Slashes form the letters, imitating the stitching of the numbers sewn on the uniforms of concentration camp inmates. The lettering is the the colour of dried blood.

From a gap in the wall, a narrow staircase leads down into a concrete courtyard. The walls are the colour of ash. Where the two longer sides meet is a low opening fronted by a spiked gateway. Beyond, all that is visible are the murky waters of the Seine. It is eerily reminiscent of Traitors’ Gate, the ancient one-way entrance into the Tower of London from the Thames. 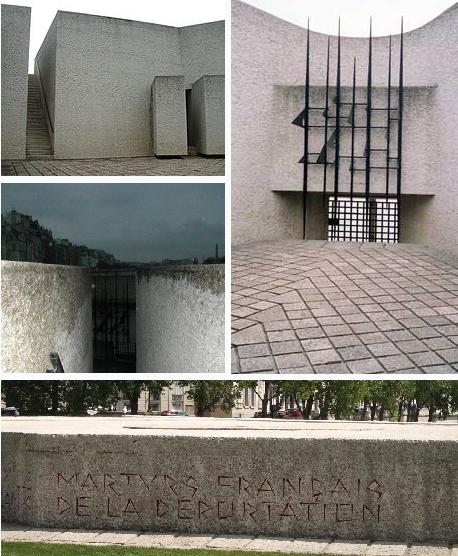 The courtyard walls loom six metres high, creating a feeling of confinement. Georges-Henri Pingusson, the memorial’s architect, designed it to evoke the concentration camp environment, with bare concrete, barred openings, narrow passages and no visible horizon. The memorial creates triangular spaces and patterns, reflecting the symbolic triangle worn by all deportees and coloured according to the classification of each persecuted group.
[. . .]
A narrow entrance off the courtyard leads to a dim inner chamber, with walls of the same bare concrete. The air is chilly. Black triangular recesses are in the walls, each inscribed with the name of a concentration camp, and each containing earth and ashes gathered from that camp. Auschwitz-Birkenau, Dachau, Buchenwald . . . 30 names, 30 triangles.

Inscriptions in the same lettering as on the wall outside line the main chamber. Texts and poems – by the likes of Robert Desnos, Louis Aragon, Jean-Paul Sartre and Antoine de Saint-Exupery – recall the deportation.
[. . .]
Facing the entrance is a barred opening, beyond which a long narrow vault stretches away to end in a blank black wall. The body of an unknown deportee lies beneath the stone-flagged floor. The walls glow softly with thousands of tiny yellow lights, representing the deportees who never returned from the east. Two prison cells lead off the main chamber. Visitors peer in, silenced by the blank austerity. No one speaks. The only sounds are the echo of footsteps scraping on the concrete and people sniffing, not all of them just from the cold.