March 1 is a public holiday in (South) Korea and commemorates the day in 1919 when, in Tapgol Park in the centre of Seoul, independence campaigners proclaimed a Declaration of Independence from Japan. About 2 million Koreans responded in hundreds of demonstrations throughout the country. Thousands were killed. The park is small, roughly 200m by 100m. It has ancient origins, and was home to a temple at least 700 years ago. In 1467, King Sejo ordered the construction of a 10-story pagoda in the temple grounds in repentance for having usurped the throne of his young nephew King Danjong. This pagoda ‘Wongaksaji Sipcheung Seoktap’ still stands (in an ugly glass protective building) and the park is named after it. 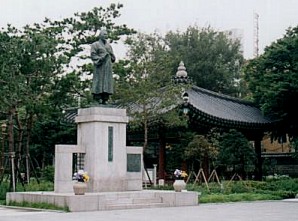 Tapgol was converted into a modern park in 1897 and is now venerated as the birthplace of modern Korean independence, with memorials of the early independence struggle, and a statue of Sun Pyong-hui, leader of the 1919 independence movement. Japan had annexed Korea and abolished the Korean monarchy in 1910, following a long period of Japanese domination in Korean affairs. Independence was not regained until the defeat of Japan at the end of the second world war—to be soon followed by the Korean war.

All this interests me because of my visit to Korea with James; we stayed in a hotel just a short walk from Tapgol Park.