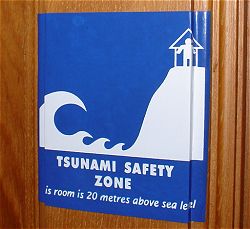 Our Patong holiday began eventfully. The evening we arrived there was tsunami scare, following bad earthquakes and loss of life in Sumatra. The staff of our hotel were clearly worried, although professionally calm. In our room was a well-written instruction card on tsunami evacuation procedures.

At about 6pm, Indonesian authorities issued a tsunami warning after shocks of 7.9 on the Richter scale. The Thai National Disaster Warning Center issued no official alert, but when national television broke the news about 7.30 pm, seaside bars and shops in Patong closed as people headed calmly for higher ground. There were traffic jams along the road leading inland over Patong Hill. Closer to the beach, police switched traffic to one-way, heading away from the beach. Phuket’s 19 tsunami warning towers with emergency vehicles and equipment were manned as a precaution. In the end, it all came to nothing, but it was a good action drill for the authorities and went well.

We are away from the centre of town, high on the hillside, and were little affected. It was remarkable how well Phuket seemed to have recoved from the tsunami damage of two years earlier, although, of course, the personal stories are largely hidden from the tourists. 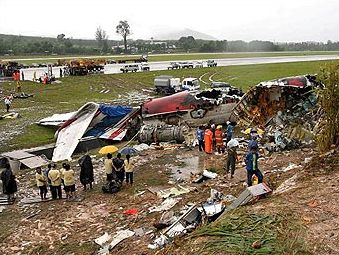 Meanwhile, at Phuket airport, a 24-year-old One-Two-Go airlines MD-82 skidded off the runway, crashed, broke in two and burned while trying to land in driving rain, killing many. Press images show the crumpled and smoking fuselage of the flight from Bangkok, with part of the plane among trees alongside the runway. It had been raining heavily all day and visibility was poor. Attempting to land, the pilot decided to make a go-around but the plane apparently lost balance. One-Two-Go Airlines began operations in 2003 and is the domestic subsidiary of Orient-Thai Airlines. I’m not sorry that we flew in to Phuket in a new Airbus operated by Silk Air, a Singapore Airlines subsidiary.

Usually I prefer to be a low-budget traveler, rather than a luxury-class tourist. But this time James and I were glad to make an exception, for we were both weary after a year that was difficult for each of us for differing reasons. We spent much of our holiday doing as little as possible for as long as possible, lazing by the pool, lazing in the pool, trying hard not to eat or drink too much, and buying a few things that we needed anyway&mdash;plus one souvenir, a fine porcelain gold and enamel hand painted teapot, which will be well used.

It seemed a risk to visit Phuket during the wet monsoonal off-season. At first we wondered whether we had been wise, for there were storms and heavy downpours in the first few days of our stay. Yet, the rain was a refreshing contrast from drought-troubled Australia. The clouds soon cleared and there was sunshine and gentle breezes. Our travel and accommodation package was a bargain compared to high-season prices. In the off-season, hotel staff had more time to provide better, relaxed, service. For little extra, we had an ocean-view room, which we enjoyed greatly. 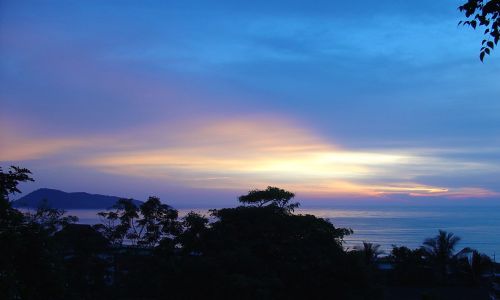 The sea was alive in its many moods and the monsoon winds. Patong is famed for its sunsets as the sun dips below the Andaman Sea to the west. The tropical evenings and early mornings were reminiscent of my two years in Sabah, decades ago.

In our resort there were fine gardens, splendid flowers, civil people (guests and staff) and exemplary service. Patong is a contrasting mix of delight and sleaze. The Thais are a justly proud and independent people. This made it all the more saddening to see the touting and swindling directed at the desires of some tourists for sex, booze and trinkets. One cannot walk through the town without being offered a hundred times a massage, a meal or a ‘tuk-tuk’ taxi.

The prices of restaurant meals in our hotel and elsewhere were a nasty surprise and we were glad to find cheaper places to eat at a quarter the price. Patong is expensive compared with much of Thailand. It has a reputation for fine seafood, but fish was much more expensive even than in Australia. We stayed with more humble fare, though it was fun to find a good home-style Italian restaurant managed by a genuine Italian! 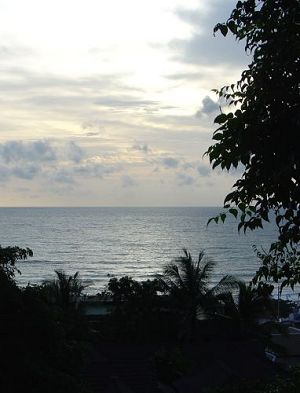 Tourists often have little idea of what is going on in the country they visit, especially when they know nothing of the local language, but we were able to pick up a few things. Our visit coincided with the anniversary of the 19 November 2006 military coup in Thailand. The English-language Bangkok Post, for example, was critical of the régime’s failure to meet the high hopes that had been held for it. The loyalty and respect that the Thai people have for their monarch is evident everywhere, but it is equally evident that many Thai people are disappointed by its politics and its politicians.

Between dips in the pool, I slowly and prayerfully worked through Basil Pennington’s small but enriching book Engaging the world with Merton (1988). I’m still pondering its implications for me. The other thing I did on our holiday was learn to play backgammon-not very well it seems, as James has beat me by about 50 games to 2. 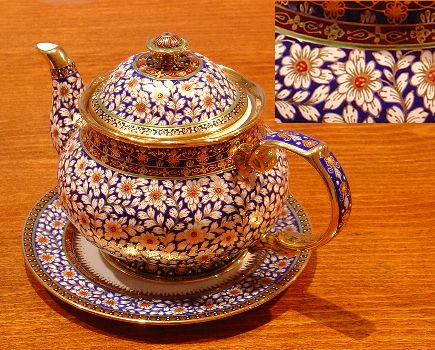