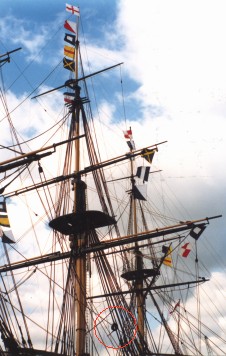 In 2005, more than 160 ships and vessels from 63 countries, including contingents from 35 navies, countries gathered off England’s south coast to commemorate and re-enact the Battle of Trafalgar, which occurred 200 years earlier, on 21 October 1805. The Queen conducted a naval review to commemorate Britain’s victory in the battle, which made Britain ‘ruler of the waves’ for more than a century. During the battle, British admiral Horatio Nelson was killed by a French sniper.

I was in England as a tourist in 1993 and, entirely by coincidence, I went to Portsmouth on 21 October. It was not until I was there that I realised it was Trafalgar Day. H.M.S. Victory, Nelson’s flagship, which is in the Portsmouth naval dockyard, was flying the signal "England expects that every man will do his duty" that Nelson flew in the Victory at 11.15 am on 21 October 1805. I took this picture (scanned from a slightly dodgy print.) 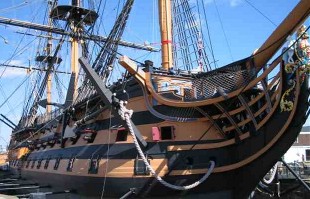 Though in permanent dry dock, H.M.S. Victory is maintained in permanent commission as the flagship of the Commander-in-Chief Home Waters of the Royal Navy. The Commander-in-Chief’s pendant is flying at the mainmast head. A commissioning pendant and the White Ensign designate the ship as in commission. The great cabin is fitted out for ceremonial dinners on great occasions. On Trafalgar Day, the toast is "The immortal memory." On Trafalgar Day, a wreath (circled) overhangs the spot where Nelson fell and flowers are placed in the orlop at the spot where he died.