Shingles had always seemed to me one of those half understood diseases from Grandpa’s generation. I’m painfully learning that that is far from the case. The National Institute of Neurological Disorders and Stroke has information, though this page from the UK is more helpful for patients. There is no prevention or cure for shingles, but I shall be OK after much rest, TLC, pain killers, antibiotics and famciclovir to prevent post herpetic neuralgia, a potentially nasty after-effect. The moral, ladies and gentlemen, is to make sure that your children receive the excellent chicken pox vaccine that is now available! 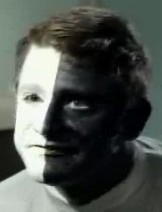 One of the odd things about shingles is that it attacks only one side of the body or one side of the head. This is because the virus travels through the nervous system which is largely divided left-right. It reminds me of an ancient Star Trek I first saw on black and white TV, “Let that be your last battlefield” (ep. 70, Jan. 1969), in which the Entreprise encounters two warring half-black, half-white human-like beings, Lokai (Lou Antonio) and Bele (Frank Gorshin). Lokai’s people, black on their left sides, are opposite to Bele’s people, and therefore seen as inferior. Bele, a lawman, has been pursuing Lokai, an escapee from oppression, for thousands of hatred-filled years. This was powerful stuff just a couple of years after massive ‘race riots’ in the US in 1967.

This was the first Easter since James and I joined St Philip’s and I had been looking forward to it. So it’s been frustrating to be too ill to participate, though I did totter along to choral Eucharist on Easter Day – and splendid it was too.

While still convalescent from shingles [herpes zoster], I was interested in some widely-reported work of the Shingles Prevention Study Group, published in an article with no less than 49 (!) authors, “A Vaccine to Prevent Herpes Zoster and Postherpetic Neuralgia in Older Adults”, New England Journal of Medicine, 352(22):2271-2284, 2 June 2005.

The researchers tested whether vaccination against the virus would decrease the incidence, severity, or both of herpes zoster and postherpetic neuralgia (PHN, which I still have) among older adults. The incidence and severity of shingles and PHN increase with age. In a large trial, 38,546 adults 60 years of age or older were enrolled in a randomized, double-blind, placebo-controlled trial of a live attenuated vaccine”
After a median of 3.12 years of surveillance of the 95% of participants who remained in the trial, a total of 957 confirmed cases of herpes zoster (315 among vaccine recipients and 642 among placebo recipients) and 107 cases of postherpetic neuralgia (27 among vaccine recipients and 80 among placebo recipients) were recorded for analysis.