For Roman Catholics, 8th December is the solemnity of the Immaculate Conception of the Blessed Virgin Mary. Anglicans do not need this event to have been "immaculate", but in a minor festival today, do note that it happened.

In The Bite in the Apple on 3 December 2015, Nancy Rockwell wrote on "No More Lying About Mary."

It’s Advent, and the same old lies about Mary are slipping over pulpits and out of parish letters, Christmas cards, public prayers, TV holiday movies, and late night comics’ jokes.

The subjugation of Mary, the maligning of her as meek, mild, and mindless, has been harmful to millions.

Hiding within the wonder of Christmas are a thousand years of doctrinal female subjugation, doctrines that, like tinsel, are dripped all over the season of Christmas. In the midst of the celebration of Wonderful Life, these malicious ideas keep women from feeling empowered, invited to be strong, and urged by God to imagine new ways to live, as Mary of Nazareth did, who mothered God’s redemption of the human world. [&hellip]

Mary, wanted by God, according to the angel, for her bold, independent, adventuresome spirit, decides to bear a holy child—for a bold agenda: to bring the mighty down from their thrones; to scatter the proud in the imagination of their hearts, to fill the hungry with good things and send the rich empty away. This is Mary: well-spoken, wise, gritty. […] She is determined, not domestic; free, not foolish; holy, not helpless; strong, not submissive. She beckons women everywhere to speak out for God’s justice, which is waiting to be born into this world.

Why, then. I wonder, is so much other silliness, heresy, delusion, tackiness and downright untruth about Mary? The “Immaculate Conception” and the “Assumption” are at the peak of this card-castle of foolishness. A 2005 joint statement by the Anglican – Roman Catholic International Commission (ARCIC), Mary: Grace and Hope in Christ, helpfully shows that the two communions have much in common in their appreciation of this remarkable woman. 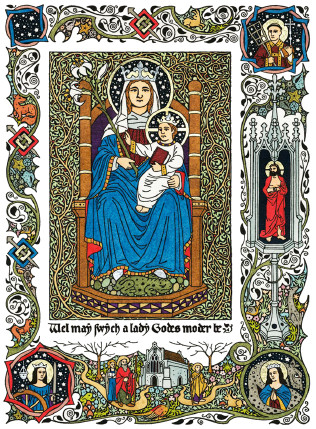 "Roman Catholics, however, are required to believe the teaching defined by Pope Pius XII in 1950: ‘that the Immaculate Mother of God, the ever-Virgin Mary, having completed the course of her earthly life, was assumed body and soul into heavenly glory.’ [para. 58] and that, as determined in 1854, "the most blessed Virgin Mary was, from the first moment of her conception, by a singular grace and privilege of almighty God and in view of the merits of Christ Jesus the Saviour of the human race, preserved immune from all stain of original sin."[para 59]. "The particular circumstances and precise formulations of the 1854 and 1950 definitions have created problems not only for Anglicans but also for other Christians." [para 61] — an understatement indeed.

Massive and glorious cathedrals are devoted to these heresies: The glorious Cathedral of Our Lady of Chartres is an eminent example. Travelling through much of Europe, one finds places littered with depictions of Mary: much more so than of Jesus himself. People flock to shrines where she is supposed to have appeared, such as the National Catholic Shrine of The Basilica of our Lady of Walsingham in England, and the nearby Anglican Shrine of Our Lady of Walsingham — which has connections even in Australia.

The Shrine is where in the year 1061, a Saxon noblewoman, Richeldis de Faverches is reputed to have had vision in which was taken by Mary to be shown the house in Nazareth where Gabriel had announced the news of the birth of Jesus and to have been asked by Mary to build replica of that house in Walsingham.